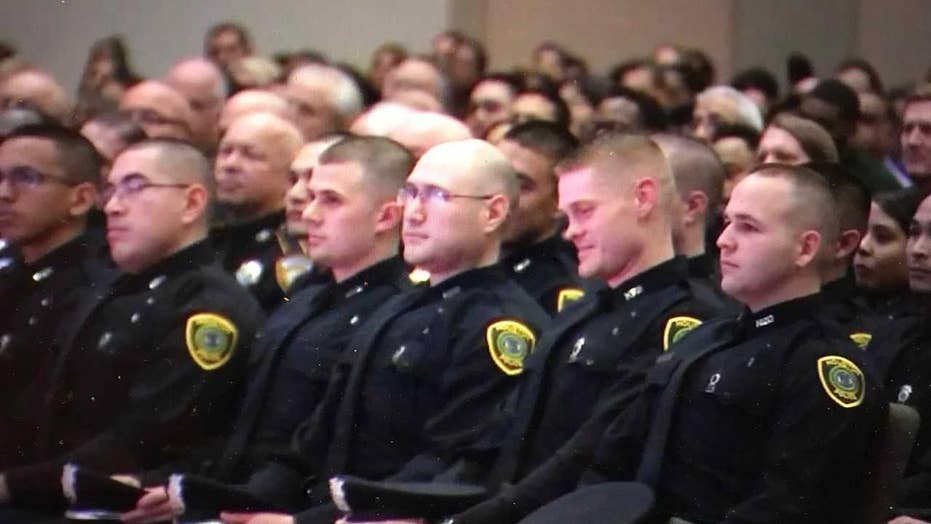 Police departments across the country are struggling to hire more officers

Houston has been dealing with a shortage of police officers. The police department said it’s been short 1,500 officers for over a generation.

“I don’t think it’s a shock to anyone that we’ve been doing more with less for far too long.  We have fewer police officers than in 2001,” said Joe Gamaldi, president of the Houston Police Officers Union.

Gamaldi said the shortage has already affected the quality of service, pointing to higher response times. He said response times for Code 1 calls, which are time critical cases such robberies and shootings, have increased from 5 minutes to 6-and-a-half minutes.

“I think the people of this city deserve better service,” Gamaldi said.

Last week, the Houston Police Department announced a pledge to hire 500 police officers over the next five years. Gamaldi said it’s the city’s first sustainable plan to increase the number of officers. The mayor and every city councilmember offered support.

The police shortage has already affected the quality of service in Houston, with response times rising. An official said response times for Code 1 calls, which are time critical cases such robberies and shootings, have increased from 5 minutes to 6-and-a-half minutes. (REUTERS)

But, the city has not released specific details on how they’ll fund the pledge.

For Gamaldi, however, the commitment is a move in the right direction.

“We’re expecting them to hold their end of the deal,” he said.

Houston isn’t the only city struggling to get more officers

Buckler said the shortages across the country could be the result of different factors: limited budgets, growing number of retirees, and fewer qualified applicants.

He also said millennials are less likely to join the police force. He said long shifts, imprecise work schedules, and working on holidays could contribute to the lack of interest.

“Millennials view things very different than earlier generations, and when you think about the types of jobs they’re looking to get into, very often policing doesn’t fit the bill of what they’re looking for,” said Buckler.

In Dallas, Michael Mata , president of the Dallas Police Association, said the situation is even worse.

“We’re not being able to hire anybody. We’ve lost almost a thousand officers in less than 18 months,” Mata said.

Mata said like Houston, Dallas has seen a change in the quality of service.

“Our crime is through the roof. Our Priority 4 calls, you could wait up to 18 hours,” he said.

He cited low pay as a reason for the shortage.

“We have such low starting pay that qualified officers within the market don’t come to Dallas,” said Mata.

According to the Dallas Police Department website, the starting salary for a police officer can range from $49,000 to $52,800 with a four-year college degree.

Gamaldi said a starting salary for a Houston police officer begins at around $42,000 in the first year. But, he said salaries jump significantly after the first year, to the high 50’s, which has helped with hiring.

Mata said Dallas hasn’t developed a plan to hire more officers. He said if the city won’t pay, it’s the public that will ultimately pay the price.