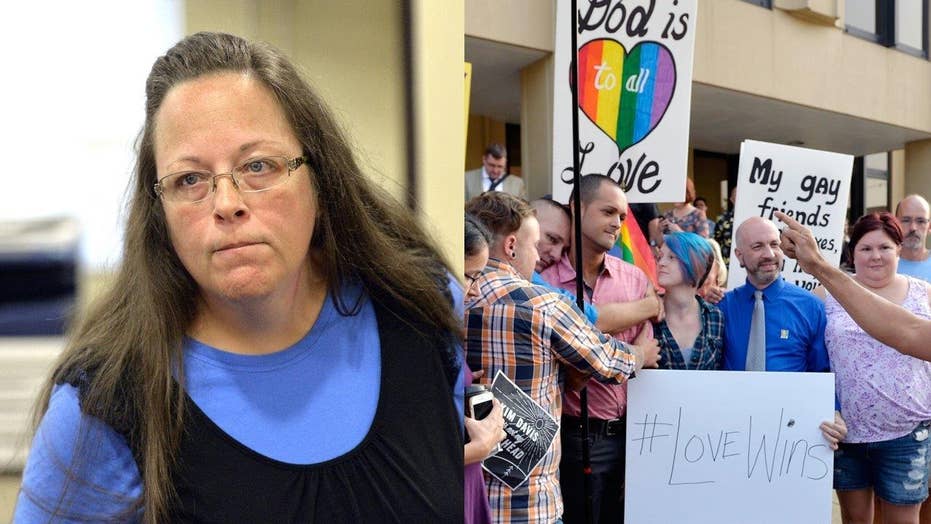 US Christians facing a discriminatory tax?

Alan Colmes vs: The Liberty Counsel's Mat Staver on the idea that gays are borrowing the concept of a 'jizya' tax

Richie Clendenen, a pastor at the Christian Fellowship Church in Marshall County, Kentucky, used a recent Sunday sermon to announce to his congregation that the most hated people in the nation at this time are Christians.

"I believe that the voice of Christians is trying to be silenced," Clendenen said, as WKYT reported.

"[W]e are moving rapidly toward the criminalization of Christianity."

Approximately 75 percent of the U.S. population identify as Christians, according to a December 2015 Gallup Poll. This percentage has decreased by five points since 2008. Although the majority of the nation is still Christian, Pastor Clendenen asserted they have the smallest voice in our culture -- and their opinions are often spat upon. Clendenen is not the only person who thinks this; many have argued the same.

Some 63 percent of Americans agree that Christians are increasingly confronted with intolerance in America, according to a LifeWay Research study conducted via phone surveys in 2015.

The issue of hate is becoming an increasingly dominant theme in our country today, as political mudslinging has reached a new high -- with right now front-and-center. Issues such as abortion, gay marriage, civil rights and gun control continue to divide and distance individuals, particularly in a contentious election year.

Recently, many rulings from the Supreme Court have disappointed the Christian majority. Last year, Obergefell v. Hodges legalized gay marriage, while two weeks ago, Whole Woman's Health v. Hellerstedt disappointed pro-life advocates by striking down tough abortion laws in Texas. These decisions didn't align with Christian beliefs and have since led followers to feel forced to act on things they don't believe in.

"[W]e are moving rapidly toward the criminalization of Christianity," said former GOP candidate Mike Huckabee, according to the Huffington Post. Huckabee is one of the many who feel the effects of the changing face of Christianity in America.

Many millennials are turning away from organized faith, and the percentage of Christians is certainly lowest amongst young Americans, according to the Gallup Poll.

Billy Graham, one of this country's most prominent and influential pastors, spoke out in 2015 for Christians to prepare themselves for persecution, and to be ready to stand up for their faith.

"Since we have experienced little religious persecution in this country, it is likely that under pressure many would deny Christ. Those who shout the loudest about their faith may surrender soonest," Graham said, as The Christian Post and others reported.

LifeWay also found that 6 out of 10 Americans believe religious liberty in the United States is declining. As courts wrestle with taking the words "under God" from the pledge of allegiance and phrases such as "Merry Christmas" have been substituted for "Happy Holidays" -- Christians ideology are becoming increasingly silenced in the public sphere.

These sentiments in America are particularly interesting in light of the terrible genocide against Christians that is occurring worldwide.

Christians are on the watchlist for severe persecution in countries such as North Korea, Iraq, Eritrea, Afghanistan and Syria, according to a list from Open Doors, a non-profit that aims to serve persecuted Christians worldwide. Approximately 322 Christians are killed for their faith each month, according to reports.

Christian intolerance is real in the 21st century -- and many are warning it's coming to a town near you.