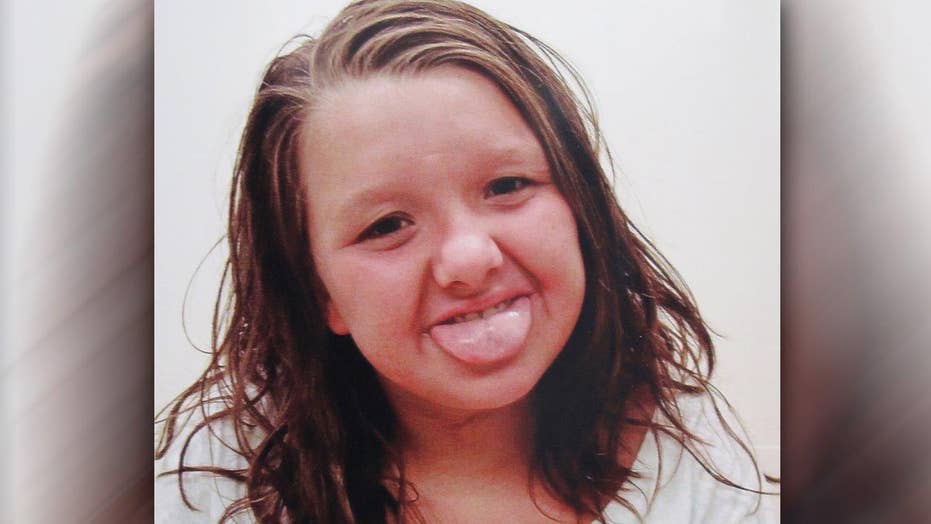 Two Virginia Tech freshmen are accused in the murder of a 13-year-old Nicole Lovell, but very little info has been released. Griff Jenkins and Ted Williams report for 'On the Record'

Two Virginia Tech students carefully planned the kidnapping and killing of a 13-year-old girl, arranging a pre-dawn rendezvous online after buying cleaning supplies and a shovel at separate Wal-Mart stores, a prosecutor alleged on Thursday.

Pettitt did not suggest a possible motive in court, or describe the killing itself. But she said messages on the girl's phone led police to the college freshmen, who had decided together that Eisenhauer would cut the girl's throat.

Keepers, 19, spoke in court as well, telling the judge that she began cutting her own body and had considered suicide "a few times" after being bullied herself in school five years ago. She said she's been in therapy and taking Prozac since then.

Her lawyers said her mental health could unravel behind bars, and she's allergic to the gluten in jail food.

"We understand the allegations are disturbing and serious," defense attorney Kristopher Olin said. "But they are just allegations."

But the prosecutor urged the judge to keep her jailed. While Keepers is adamant that she was not present at the killing, Pettitt said, she "is in the same position as the person who carried out the murder."

Eisenhauer initially denied his involvement when police found his messages on Nicole's phone, but eventually admitted that he drove to the girl's home, watched her climb out of her window, and greeted her with a "side hug" before they drove off to get Keepers, Pettitt said.

Once Nicole was dead, Keepers helped load her body into Eisenhauer's Lexus, the prosecutor said.

It was Keepers who revealed the plot after officers tracked her down, but she tried to warn Eisenhauer first, sending him a one-word text message reading "Police," Pettitt said.

The 18-year-old distance runner at Virginia Tech is jailed without bond on charges of kidnapping and first-degree murder. The police report on his arrest Saturday says he told officers: "I believe the truth will set me free."

Keepers is charged with being an accessory to kidnap and murder before and after these crimes, and with helping her fellow engineering major dispose of the body at a remote spot in North Carolina, two hours south of campus.

Nicole's parents, David Lovell and Tammy Weeks, attended the hearing but made no comments before leaving for her private funeral.

Friends and neighbors have described her as a lovely if awkward girl, clinging to childhood ways while exploring older behaviors.

A neighbor said she told 8-year-old friends before she vanished that she planned to sneak out to meet her 18-year-old "boyfriend," a man named David whose picture she displayed on her phone.

A 911 call on Jan. 27 alerted police that Nicole was missing, Pettitt said. Weeks discovered that the door to her daughter's bedroom had been barricaded, and that her phone and her "Minions" blanket also were gone.

An examination of emails and social media showed that Eisenhauer and Nicole last made contact at 12:39 that morning, shortly before she disappeared, the prosecutor said.

Like others her age, Nicole was tech-savvy, posting on Facebook and chatting using the Kik messenger app. But she also had to take daily medicine to keep her transplanted liver from failing, and survived other harrowing health problems that left her with a tracheotomy scar in her neck.

Defense lawyers argued that Keepers had her own troubled past and would become mentally unstable if kept in isolation for her own protection from other inmates.

Shackled, handcuffed and wearing orange jail garb, Keepers told the judge she's not getting her full dosage of anti-anxiety medicine in jail.

"I've learned how to love myself and to take care of myself and deal with any stress that I have," Keepers said, describing how she had promised a friend that if she stopped cutting herself, she would get a tattoo of a semi-colon, representing that her life was not ending, but taking a new path.

Her father, Tim Keepers, said he and his wife, Sara, learned of Eisenhauer in October, and that the young man had "dropped everything" last year to rush their daughter to a hospital for an emergency appendectomy.

Eisenhauer and Keepers went to high schools five miles apart in Columbia, Maryland. Excelling in the classroom and on the track, Eisenhauer drew raves from his coach and principal at Wilde Lake High School, and was focused on competing with top college runners.

Keepers, for her part, displayed a packed resume on her LinkedIn profile, including a summer internship with NASA, where she made how-to videos for engineers. She planned for follow her father's footsteps into aerospace engineering, Tim Keepers said.