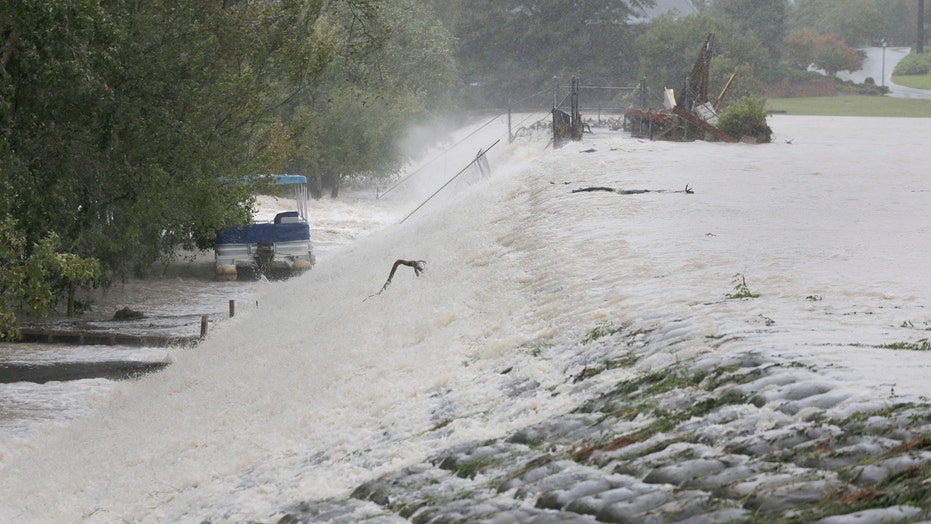 GEORGETOWN, S.C. – As the death toll rose to 19 from days of devastating rains in the Carolinas, residents on Wednesday prepared for the state's swollen rivers to unleash a second round of flooding.

Officials say two people who disappeared in waters after they drove around a barricade on a closed road have died. Deputies in Richland County, South Carolina, said Wednesday that the pair's truck plunged into water at a 20-foot gap where the pavement was washed out.

Sheriff's spokesman Lt. Curtis Wilson said three people in the pickup managed to get to safety around 3 a.m., but divers found the two others dead inside the truck by divers hours later. Their names weren't released.

Nine people have now been killed in the flooding in Richland County. All were in vehicles. Seventeen of those killed since the storm started last week were in South Carolina.

Gov. Nikki Haley said there had been nearly 5,000 service calls made since the storms began during the weekend, more than 2,000 just for collisions. But Haley, speaking at a Wednesday news conference, also marvelled at residents' resilience.

There are currently 3,000 National Guard troops in the state and Haley said that number would increase to 5,000.

"This is all to keep things moving and to keep the action happening," she said.

In the Columbia area, where some have started to return home to assess damage and clean up, the threat of more flooding still hadn't lifted. About 1,000 residents near the compromised Beaver Dam were told to evacuate Wednesday morning. Crews were filling a sinkhole with rocks in hopes that would stabilize the dam.

In coastal Georgetown, one of America's oldest cities, Scott Youngblood was putting more sandbags Tuesday by the door of the Augustus & Carolina furniture store on Front Street, the popular tourist attraction that runs along the Sampit River.

Each day since last weekend's storm — which sent more than a foot of water washing down the street — water at high tide has lapped against those sandbags. Residents are concerned there may be more flooding on the Black and Waccamaw rivers — two waterways cited as worrisome by Haley. Both drain into Georgetown County.

Youngblood hopes things won't be as bad this time as earlier in the week.

"We're hanging our hat on that we're not going to have that combination of tide and rain and such," he said. "We had so much rain, but the primary thing we were experiencing was the water table coming up through the bottom bubbling up from beneath the flooring. We had quite a bit of damage."

Tom and Christine Doran, retired teachers who recently moved to a riverfront apartment in Georgetown, were moving their belongings out Tuesday after battling tides and rain for four days.

"The first flooding was Saturday afternoon and we kept ahead of that with a wet vac and we thought, 'We've got this,'" Tom Doran said. "Then it just started coming in from all sides. It was just too high. Every afternoon with the high tide it floods up to 5 inches."

After taking an aerial tour of damaged areas on Tuesday, Haley said that while the sunshine was a good sign, the state still needs to be cautious.

"We are going to be extremely careful. We are watching this minute by minute," she said. She said evacuations may be needed toward the coast because of rivers swollen from the storm, which has killed 15 in South Carolina and claimed two lives in North Carolina.

Haley said it was too soon to estimate the damage statewide. She said it could be "any amount of dollars." The Republican governor quickly got a federal disaster declaration from President Barack Obama, freeing up money and resources.

Distributing safe drinking water was a challenge. In the region around Columbia, as many as 40,000 homes lacked water, although some service was restored Tuesday. Mayor Steve Benjamin said 375,000 water customers will likely have to boil their water before drinking or cooking for "quite some time."

And crews in Columbia were still working Wednesday to repair a breach in a canal that was threatening the main water supply for 375,000 people, Utilities Director Joey Jaco said. Workers were building a rock dam a few hundred feet north of the breach, which is near the city's hydroelectric plant in view of morning commuters crossing the Gervais Street bridge.

The normally calm waters of the canal looked more like a whitewater rapids course after days of rainfall, making it difficult for workers to move equipment to put the dam in place.

The power grid was returning to normal after nearly 30,000 customers lost electricity. Roads and bridges were taking longer to restore: Some 200 engineers were inspecting more than 400 spots that remained closed Tuesday, including parts of Interstate 95.

South Carolina was soaked by what experts at the National Oceanic and Atmospheric Administration called a "fire hose" of tropical moisture spun off by Hurricane Joaquin, which mostly missed the East Coast.

Authorities have made hundreds of water rescues since then, lifting people and animals to safety. About 800 people were in two dozen shelters, and the governor expects that number to rise.