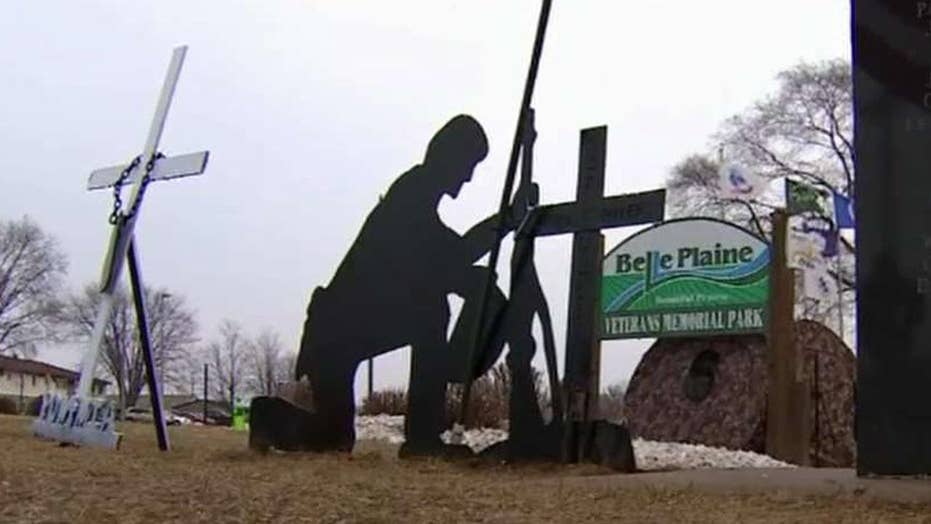 A Minnesota city that drew backlash after pulling a cross from a veterans memorial park has agreed to bring it back as early as Tuesday -- inside a section of the park that supporters have called a "free speech zone."

The Freedom From Religion Foundation demanded the city of Belle Plaine remove the cross last month, claiming it violated the separation of church and state. After workers took it down, many supporters of vets responded by setting up their own crosses, and the Second Brigade Motorcycle Club patrolled the park to watch out for vandalism.

I'm told they will be welding the cross back on by as early as tonight. The memorial will look like this again soon. pic.twitter.com/s3LVkhRIea

Amid the controversy in that city, the Alliance Defending Freedom, a conservative Christian nonprofit, proposed setting up a "limited public forum" inside the park, where the original cross could stand, Fox 9 reported. The name "free speech zone" has stuck, even though the park is public.

The city council narrowly approved the proposal, by a vote of 3-2. Under the plan, city leaders would set up a method of considering each proposed display, giving priority to veterans groups, the StarTribune reported.

"It sets it up so we can have something to memorialize our fallen but it also gives others a chance to memorialize theirs as well," Katie Novotny, a supporter of the cross who lived in Belle Plaine, told the news station. "It doesn’t matter if you’re Jewish, if you’re Muslim, we’re all Americans fighting this war together."

The Freedom From Religion Foundation called the idea "constitutionally problematic" in a letter before Monday's vote, Fox 9 added. The group reportedly claimed it would submit a proposal for a memorial of its own in the park.

The newly approved plan "ensures that there is no endorsement of religion by the city whatsoever because the memorials that will be put up represent the citizens that put them up," Doug Wardlow, who represented the Alliance Defending Freedom, responded.

The original memorial showed the silhouette of a soldier holding a gun and kneeling in front of a small cross. It could reappear in the park as early as Tuesday evening, according to Fox 9.

Cheers erupted in City Hall after the council gave the OK.

Belle Plaine is a 45-minute drive southwest of Minneapolis.