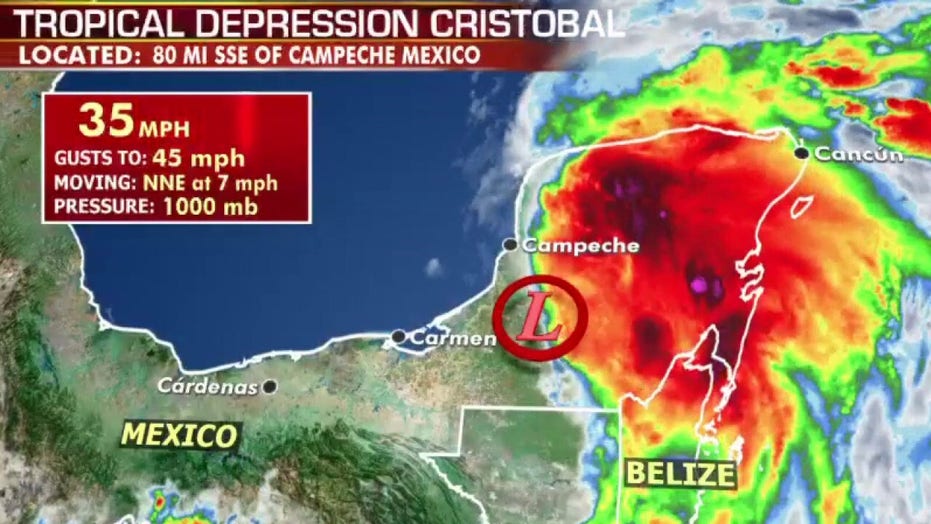 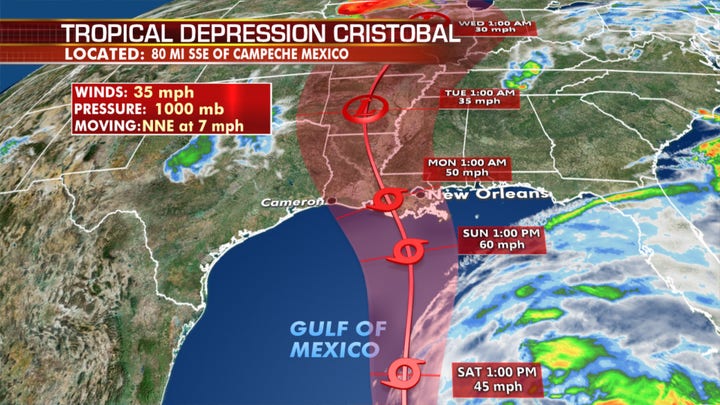 Cristobal, now a tropical depression, was expected to move into the Gulf of Mexico Friday, where it will intensify before making landfall in the U.S. this weekend.

After dumping three feet of rain in parts of Guatemala and El Salvador earlier in the week, Cristobal likely will strengthen into a tropical storm and grow, bringing a widespread impact when it makes landfall over Louisiana Sunday night into Monday.

WHERE DO TROPICAL STORMS FORM IN JUNE?

Heavy rain and flooding are the biggest dangers from this storm, with rain already moving into Florida and parts of the Gulf Coast states Friday morning.

Storm surge, wind gusts of more than 60 mph and isolated tornadoes will also be possible east of where the center makes landfall.

Flood watches are in effect for portions of Louisiana, Mississippi and South Florida, and tropical storm/storm surge advisories will also be posted today.

By nighttime, it was expected to move over the Gulf of Mexico. Once over water, Cristobal should intensify back into a tropical storm by early Saturday, then head toward the Louisiana coast over the weekend.

HURRICANE SEASON OFF TO A BUSY START

As the storm moves northward in the Gulf of Mexico, those in southern Texas and coastal Mississippi need to be aware.

Heavy rain, storm surge, strong winds and isolated tornadoes will all be possible as the system moves inland.

Isolated tornadoes also will be a concern, especially east of where Cristobal’s center eventually makes landfall.

Cristobal is the third named storm so far in a very active season, which officially just began on Monday.

There are as many as 13 to 19 named storms predicted during the Atlantic hurricane season, which runs from June 1 to Nov. 30, according to the National Oceanic and Atmospheric Administration's (NOAA) Climate Prediction Center (CPC).

Six to 10 of those could develop into hurricanes, with winds of 74 mph or more, and three to six could become major hurricanes, capable of devastating damage.