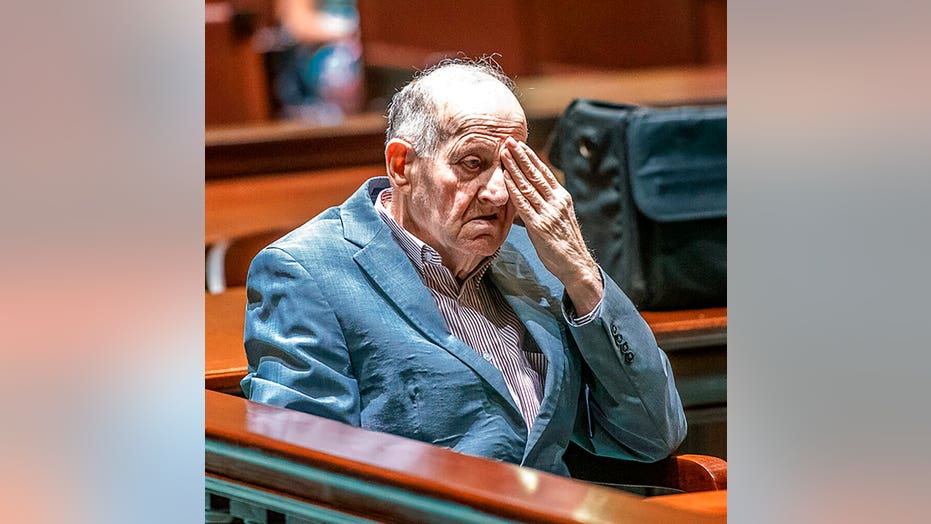 A 77-year-old man previously deemed "too old to be a threat" was sentenced to life in prison on Friday for fatally stabbing a woman in front of her children, four decades after he was convicted of a nearly identical crime.

Albert Flick was convicted last month stabbing 48-year-old Kimberly Dobbie 11 times while her twins watched on a Maine sidewalk in 2018.

Prosecutors said the elderly man was infatuated with Dobbie, who he met at a shelter while she was waiting on an apartment in Farmington. Witnesses said he routinely followed Dobbie and her twin sons to bus stops, the local library, and Dunkin', before eventually stabbing her in front of a laundromat.

In a Monday, July 15, 2019 photo, Albert Flick, sits in court at his murder trial in Auburn, Maine. A jury convicted Flick on Wednesday in the 2018 death of 48-year-old Kimberly Dobbie. (Andree Kehn/Sun Journal via AP)

The broad daylight attack in front of the laundromat and Flick's purchase of two knives were caught on surveillance video.

"He is a monster," Lori Moreau, a friend of Dobbie told AP. "I hope he rots in hell.”

Judge MaryGay Kennedy said on Friday that the attack on Dobbie was premeditated and Flick showed no remorse for his actions, saying 'nah' when the judge asked if he had anything to say, according to the Sun Journal.

Flick had a long history of violence against women and was sentenced to 30 years in prison for stabbing his wife, Sandra Flick, 14 times after she served him with divorce papers in 1979.

A judge who sentenced him for assaulting another woman said in 2010 that Flick would no longer represent a threat because of age by the time of his release in 2014. The judge disregarded the recommendation of the prosecutor and probation officer for a longer sentence.

During Flick's trial last month, prosecutors told the jury that Flick took action because Dobbie was planning to move away.

Albert Flick, left, stands beside his defense attorney, Allan Lobozzo, as the jury delivers a guilty verdict at his murder trial in Superior Court on Wednesday, July 17, 2019, in Auburn, Maine. A jury convicted Flick on Wednesday in the 2018 death of 48-year-old Kimberly Dobbie. (Steve Collins/Sun Journal via AP)

CONVICTED MURDERER, 77, DEEMED TOO OLD TO BE A THREAT, FATALLY STABBED WOMAN IN FRONT OF HER CHILDREN

"The obsession became 'If I can't have her, I will kill her,' and that's exactly what he did," Assistant Attorney General Bud Ellis said.

Defense attorney Allan Lobozzo said there was no indication that Flick posed a threat to society.

Caitlin Jasper, one of the alternate jurors during the trial told the Sun Journal she felt sorry for the victims 11-year-old children and the three men who witnessed the attack.

"It was soul-crushing for them, and they'll never be able to forget it," said Jasper.

Susan Dobbie, the victim's mother, is in the process of adopting the twins. She and Dobbie's sibling plan to provide a home for the boys in Massachusetts.