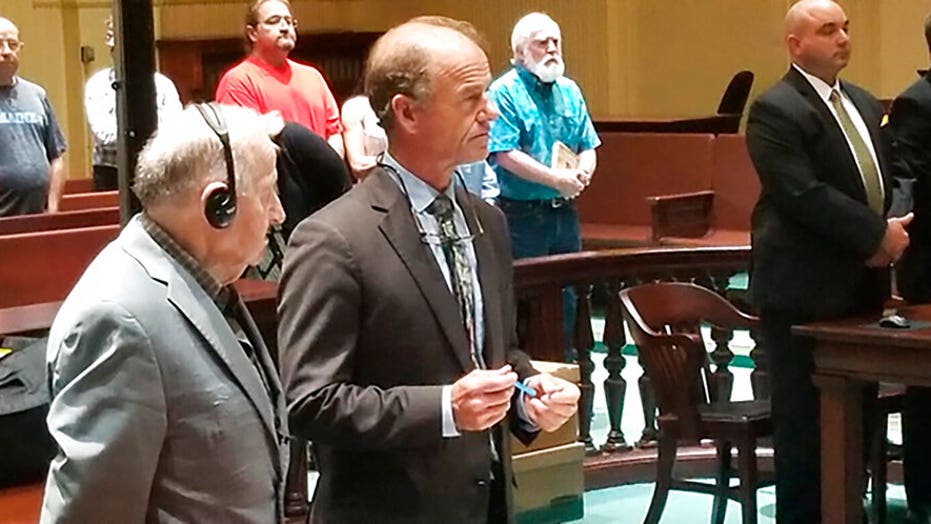 A man who served decades in prison for stabbing his wife 14 times in front of her daughter was convicted Wednesday in a nearly identical crime — stabbing a woman at least 11 times while her twin children watched.

Albert Flick, 77, of Auburn, Maine who was previously deemed too old to be a threat by a judge, was convicted in the 2018 death of Kimberly Dobbie. Jurors deliberated less than an hour before reaching its guilty verdict.

Both the attack, which was in front of a laundromat in broad daylight, and Flick's purchase two days earlier of two knives, were caught on surveillance video.

In a Monday, July 15, 2019 photo, Albert Flick, sits in court at his murder trial in Auburn, Maine. A jury convicted Flick on Wednesday in the 2018 death of 48-year-old Kimberly Dobbie. (Andree Kehn/Sun Journal via AP)

Prosecutors say Flick was infatuated with Dobbie, 48, and followed her around and dined at the homeless shelter where she was staying. They knew one another, witnesses said, but were not in a relationship.

Assistant Attorney General Bud Ellis told jurors in his closing argument that Flick knew Dobbie was going to be leaving town and thought to himself, "If I can't have her, I will kill her."

Defense attorney Allan Lobozzo said there had been no indication his client posed a threat.

The state's medical examiner testified that the wounds penetrated the victim's heart and lung.

Caitlain Jasper, one of the three alternate jurors, told the Sun Journal that she felt sorry for Dobbie's 11-year-old children and for the three men who witnessed the attack and acted swiftly to stop it.

Albert Flick, left, stands beside his defense attorney, Allan Lobozzo, as the jury delivers a guilty verdict at his murder trial in Superior Court on Wednesday, July 17, 2019, in Auburn, Maine. A jury convicted Flick on Wednesday in the 2018 death of 48-year-old Kimberly Dobbie. (Steve Collins/Sun Journal via AP)

"It was soul-crushing for them," Jasper said, "and they'll never be able to forget it."

Flick has a long history of violence against women. In 1979, he was sentenced to prison and served 25 years for stabbing his then-wife more than a dozen times in front of her daughter.

In 2010, he was sentenced again for assaulting another woman. The judge at the time ignored the recommendation of the prosecutor for a longer sentence, saying Flick would not be a threat because of his age and it didn't make sense to keep him incarcerated. He was released and moved to Lewiston in 2014.