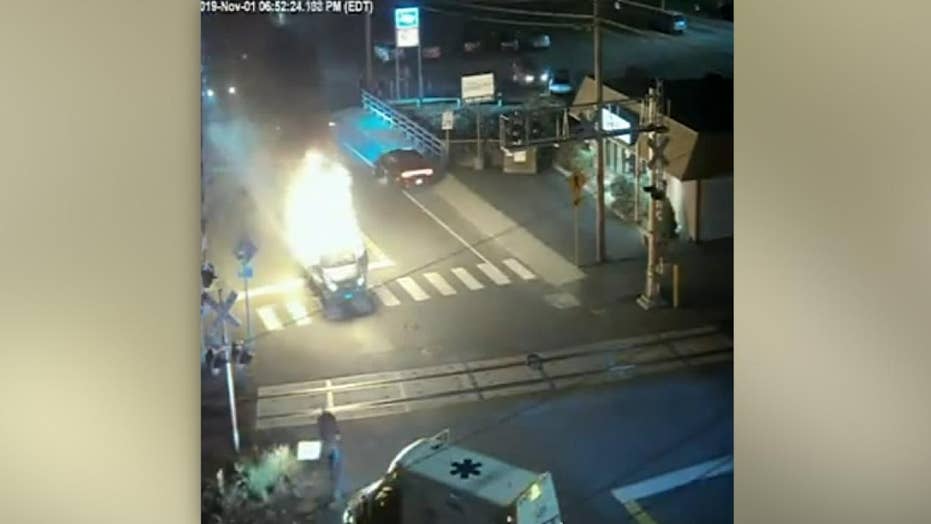 Raw video: According to The Stafford Fire Department No. 1 Inc., a security camera captured video of Edward Cyr rescuing another man from a burning car.

A Connecticut man is being hailed a hero after dramatic video shows the moment he helped pull a helpless driver from a burning vehicle earlier this month.

The Stafford Fire Department, a small town on the northern border of Connecticut and Massachusetts, posted a video to Facebook showing the dramatic moment that Edward Cyr pulled over to help save a man from a burning car on Nov. 1.

“[On] What looked to be a basic night out for dinner with his wife, Edward Cyr performed a very heroic act,” Chief David Lucia said in the post.

The aftermath of a car fire in Stafford, Conn., where a driver pulled over to pull a man out of the burning vehicle.  (Stafford Fire Department )

Cyr was going southbound on River Road at around 6:50 p.m. when he drove over the train tracks near the Stafford Town Hall and witnessed a car burst into flames.

A quick-thinking Cyr pulled over, rushed to the car and pulled out Glennwood Little.

In the video surveillance, Cyr can be seen pulling Little from the car just as the flames engulfed the entire vehicle.

“For him to do what he did, you know I’m here to spend a little bit more time with my grandchildren,” Little told WVIT.

He said he was on his way home with gas cans for his generator when he heard what he thought was a leak.

“I heard the can and I hear this 'doosh, doosh.' like the gas is leaking out and like I said I had a cigarette going, next thing I know, boom!" he told the local station.

“All of a sudden the door opens up, I didn’t even see the guy come to the door, he opens it up and he reaches in and he gets my seatbelt off," he continued. "My coat and my hat was in flames and he ripped the hat off and my coat and as he took me out I went right into the back of the ambulance.”

Little was taken to a hospital where he was treated for his injuries.

“You saved Mr. Glennwood Little from burning inside his vehicle. Words can't describe this act,” Lucia said. “Mr. Cyr, you are a hero.”