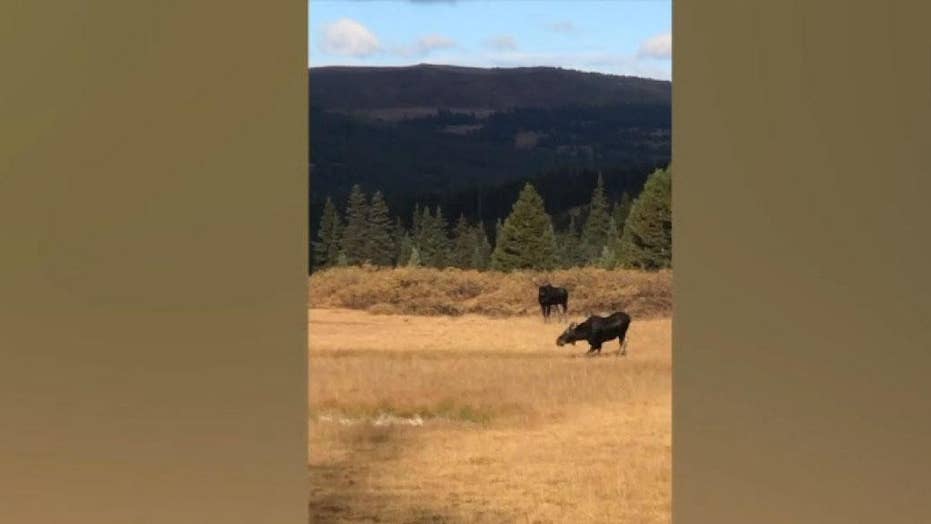 Colorado woman unharmed after 2 moose charge at her

Raw video: A woman says she feels lucky to be unharmed after two moose charged her while she was hiking Uneva Pass in Colorado.

A Colorado woman's quick thinking helped her avoid serious injury after a pair of moose charged her while she was on a recent hike.

The woman from Fort Collins, who wished to know be identified, was hiking the Uneva Pass near Copper Mountain, located between Vail and Silverthorne, when she spotted a moose appear from the woods.

As she was watching the first moose, a second animal then showed up as she began to back away. Video taken by the woman showed the moose walking in the distance and staring at her before eventually charging towards her as she ran away.

The woman said she had to hide behind a tree several times to avoid being hit by the moose.

“I thought about going to a switchback behind me, but when I started moving, they started running again,” she told FOX31. “So I got back to the tree.”

Raw video: Moose who became trapped in a New Hampshire swimming pool is rescued by the state Fish and Game Service

The New Hampshire Fish and Game service placed wooden stairs in the pool to help the moose escape.

Colorado Parks and Wildlife said peak mating season for moose and elk -- known as "the rut" --lasts through early October. The agency has warned motorists to be aware of animals that are more active, easily distracted and potentially more aggressive.

"Both bulls and cows are aggressive during the breeding season, with bulls often fighting head to head until the dominant bull drives off, injures, or even kills the challenger," the agency states.

That also applies to people enjoying the outdoors. The agency told FOX31 that people should remember to give plenty of space for wildlife, including putting an object between oneself and an animal.

The woman said she was eventually able to get away after standing by a tree for another few minutes.

“It could have been much worse,” she told FOX31. “It’s never worth it. I was really looking forward to this nice, long hike. The hike will be there another day.”