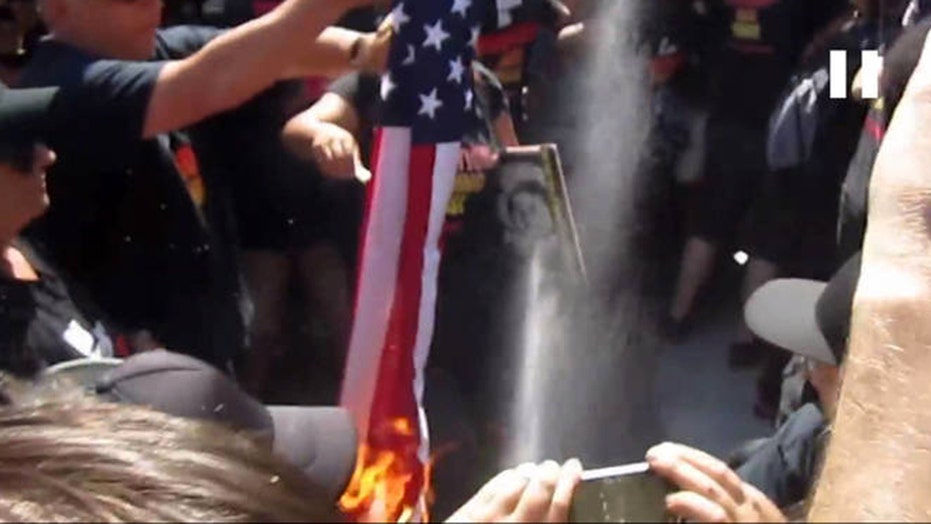 The city of Cleveland has agreed to pay $225,000 to a well-known flag-burning protester who was arrested after setting fire to an American flag at the 2016 Republican National Convention, it was reported Tuesday.

Johnson was convicted of burning an American flag at the 1984 Republican National Convention in Dallas, leading to a landmark U.S. Supreme Court ruling sanctioning flag-burning in a case in which he was the plaintiff.

Cleveland settled the case without any admission of liability, City Law Director Barbara Langhenry said, according to the Cleveland Plain Dealer Tuesday.

Mugshot for Gregory "Joey" Johnson after his flag-burning protest arrest during the 2016 Republican National Convention in Cleveland. (Cleveland Police Department)

The city previously agreed to pay $50,000 to another man who sued over his arrest during the flag-burning protest, the paper reported.

Johnson and other members of the Revolutionary Communist Party held the flag-burning protest the day after the convention nominated Donald Trump for president, according to the Plain Dealer.

Cops arrested 18 protesters and claimed they interceded after Johnson set himself on fire.

Image taken from video of flag burning protest that led to arrest of Gregory "Joey" Johnson. (The Chandra Law Firm)

The charges against Johnson were dropped by prosecutors, the paper reported. Cases against 15 others were dismissed.

As president-elect in November 2016, Trump tweeted his support for jailing flag-burners.

“Nobody should be allowed to burn the American flag - if they do, there must be consequences - perhaps loss of citizenship or year in jail!” Trump said.