Residents of the Buckeye State got an extra jolt to their Monday morning when an earthquake rattled parts of the state, overwhelming some 911 dispatch centers.

The United States Geological Survey said the 4.0 magnitude earthquake was centered in Lake Erie about 2 1/2 miles north of Eastlake, Ohio at 10:50 a.m.

The quake had a shallow depth of about 3 miles and was felt by people across the region in cities such as Mentor and Cleveland. There were no reports of damage or injuries from the quake.

The city of Mentor, located about 25 miles northeast of Cleveland, said on Twitter the shaking caused dispatch to be "overwhelmed with 911 calls."

"No reports of damage but getting lots of calls asking what it was," police said.

Many across the Cleveland metropolitan area took to social media to report the shaking.

According to the USGS, the Northeast Ohio seismic zone has had "moderately frequent earthquakes" since the first was recorded in 1823.

OFF THE COAST OF PORTUGAL, THE EARTH'S CRUST MIGHT BE PEELING IN TWO

East of the Rockies, earthquakes can typically be felt over a much broader region than those in the western U.S.

The 4.0-magnitude earthquake was reported north of Eastlake, Ohio at 10:50 a.m., according to the USGS. (USGS)

"A magnitude 4.0 eastern U.S. earthquake typically can be felt at many places as far as 100 km (60 mi) from where it occurred, and it infrequently causes damage near its source," according to USGS.

The Ohio Department of Natural Resources said at least 100 earthquakes since 1836 have been reported beneath Lake Erie offshore from Lake County. While many of the quakes have caused little to no damage, an earthquake on January 31, 1986 "strongly shook" Ohio and was felt in 10 other states and southern Canada.

"This event had a magnitude of 5.0 and caused minor to moderate damage, including broken windows and cracked plaster, in the epicentral area," the state agency states. 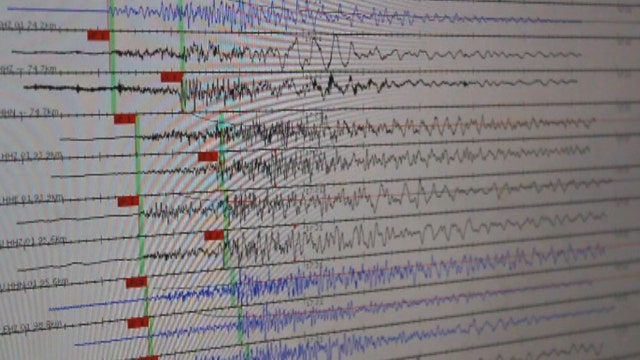 Scientists monitor quakes for signs of something larger

The ODNR said that origins of Ohio earthquakes are not entirely understood, but appears to be associated with ancient zones of weakness in the Earth's crust that formed during rifting and continental collision events about a billion years ago.

"These zones are characterized by deeply buried and poorly known faults, some of which serve as the sites for periodic release of strain that is constantly building up in the North American continental plate due to continuous movement of the tectonic plates that make up the Earth's crust," according to the agency.