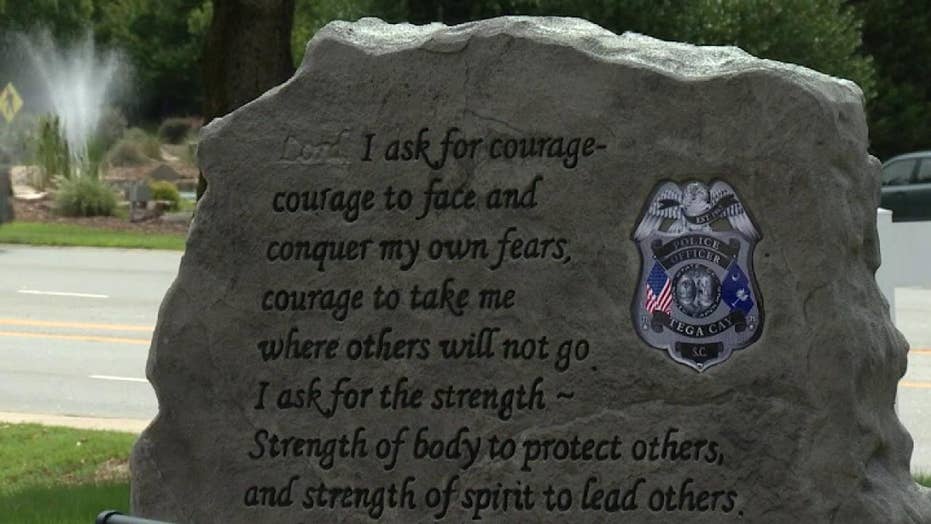 Tega Cay City Manager Charlotte Charlie says city hall received complaints almost immediately after the memorial went up and, following meetings with the city attorney, they decided to get rid of the word in question.

After literally scrubbing references to the "Lord" from a memorial honoring fallen police officers, a "divided" South Carolina city has removed the monument outright.

The Tega Cay City Council announced the decision to take down the memorial Tuesday in a Facebook post. Three references of "Lord" had been washed off the monument, which is a police officer's prayer and was in front of the police department, after some residents complained. But the decision to remove the three references to "Lord" also drew outrage.

PASTOR DOUBLES DOWN ON 'AMERICA: LOVE OR LEAVE IT' SIGN AS MEMBERS WALK OUT

City officials said they removed the monument while they sought to find a solution that "expresses our unwavering support and gratitude to those who risk their lives every day for ours."

"We attempted to find a compromise but failed as our community has further divided," city officials said. "In an attempt to find a resolution, we have upset parties on both sides of this issue and for that we are truly sorry."

The monument at the Tega Cay Police Department, gifted to the city by the local Women's Club, had only been up a few weeks before it was taken down. In the meantime, the city is looking for feedback from its residents as the city's legal team searches for a "viable solution for all concerned."

FOX 46 reported the city's attorney cautioned the monument, similar to others around the country, doesn't have historical significance so that's why they decided to edit it. Hiram Sasser, general counsel to First Liberty Institute, called it "utter nonsense."

"The country is now free from the memorial scrubbers," Sasser noted.

MARIANO RIVERA FIRES BACK AFTER HIT PIECE: 'I RESPECT [TRUMP]...WON'T TURN MY BACK' ON ISRAEL

Tuesday's decision has further angered and saddened some residents, according to posts online, many pointing to the secularization of public life.

On the front, the memorial had the Scripture reference Matthew 5:9 from Jesus' famous Sermon on the Mount, which says, "Blessed are the peacemakers, for they will be called children of God."

And on the back of the stone was a prayer: "Lord, I ask for courage. Courage to face and conquer my own fears, courage to take me where others will not go...Give me Lord, concern for others who trust me and compassion for those who need me. And please Lord, through it all, be at my side."