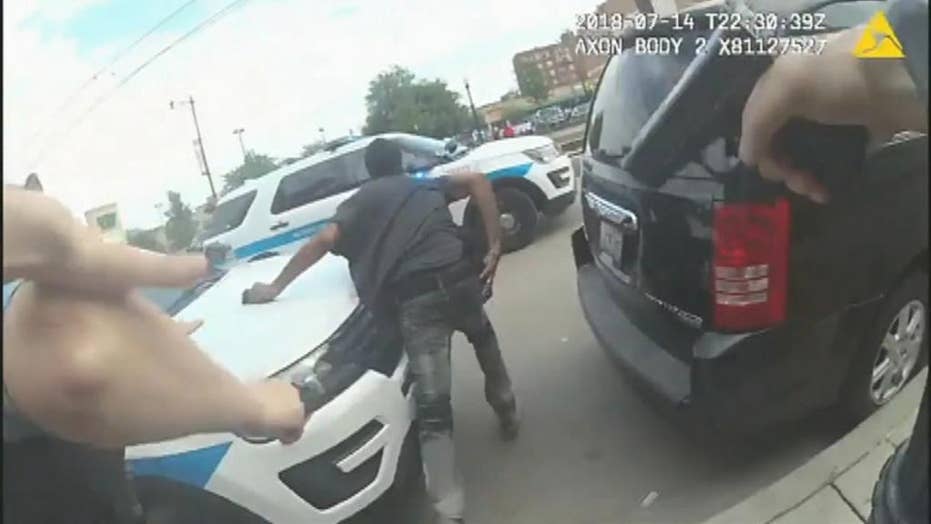 An officer was involved in a confrontation with an armed suspect in Chicago.

Footage from body cameras and other surveillance video appeared to show that a black man who was shot and killed by a Chicago police officer was armed with a gun and reached toward it as officers confronted him, officials said Sunday.

Chicago Police Superintendent Eddie Johnson said Harith Augustus, 37, had a holstered semiautomatic handgun tucked into his waistband when officers confronted him on the city's South Side. According to patrol chief Fred Waller, Augustus broke free and ran from the officers, who believed "he appeared to be reaching for a weapon" and shot him.

Police had sent the handgun and two magazines of bullets for testing, said police spokesman Anthony Guglielmi, who added that Augustus wasn't a known gang member and had no recent arrest history.

Augustus' death sparked angry protests Saturday night. Four protesters were arrested after scuffles broke out; some officers suffered minor injuries from thrown rocks and bottles, some filled with urine. Officers pulled people to the ground and struck them with batons. Two squad cars also were damaged.

Johnson told reporters he ordered the footage released to address any misinformation about the shooting and maintain calm in a bid to avoid a repeat of Saturday's unrest.

"If we expect neighborhoods to cooperate with police, we need to do our part to remain transparent," Johnson said.

Gloria Rainge, who lives in the area, told the Chicago Sun-Times that Augustus, known in the Grand Crossing neighborhood as "Snoop," worked at a barbershop and had a 5-year-old daughter.

The Rev. Jesse Jackson called the shooting a tragedy and said in a statement that it was a blessing Augustus didn't bring the girl with him Saturday, as he was known to do.

It was at least the third time in the last two weeks that a Chicago police officer shot someone.

The city erupted in protest in 2015 after the release of a video showing a white police officer shooting a black 17-year-old, Laquan McDonald, 16 times a year earlier.

The officer, Jason Van Dyke, was charged with murder. McDonald's death ultimately led to the ouster of the police chief and a series of reforms meant to curb any police abuse and to hold officers accountable.