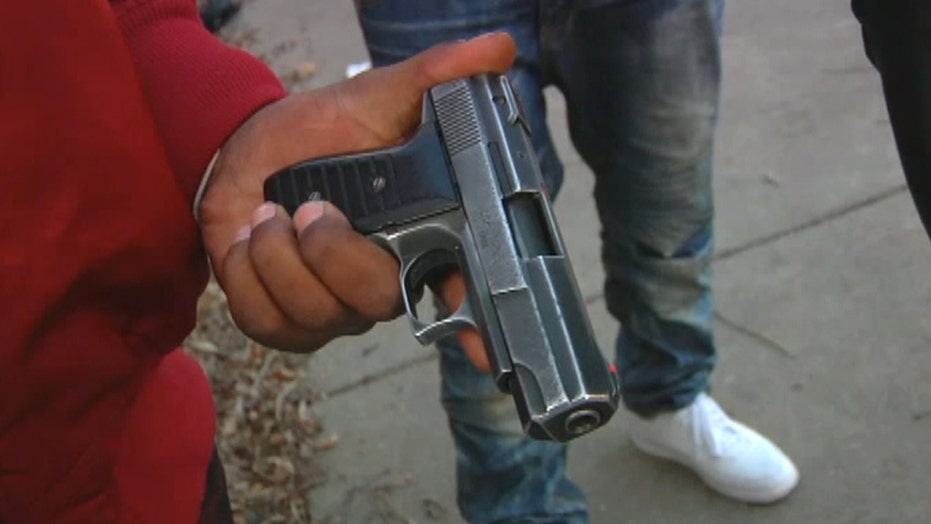 Rashad Britt grew up in the Henry Horner projects on Chicago’s West Side, known for gangs and violence. He started hanging out with the members of the Vice Lords gang for safety. “Just for protection…my friends-we gotta get to school. So, we got each other’s back on the way to school,” he says. “And sometimes, that meant carrying a gun and [being] willing to use it.”

Last Monday, I met with a group of street guys on the West Side. They say the gangs provided structure that their parents did not. “Half of these guys don’t got no mom, either they was crack heads, dope fiends, boosters or something,” says a man who would only identify himself as a member of the Black Disciples. “They moms or fathers was lost to the same gang that we getting ourselves into now.”

“We more like a family than a gang… brothers,” says Kevin Gentry – associated with the Vice Lords. In the gang, someone was kind to them. Their role models sold drugs, had money, clothes cars and girlfriends. “The gangs have become family for a lot of young men here in Chicago and across the United States. They gravitate toward the guys with charisma. They gravitate toward the guys that might protect them. But they really are not protected out there. Too many people are being killed, it’s a false sense of security,” says Tio Hardiman from Violence Interrupters, a group that attempts to predict and prevent gangland shootings.

As of the 15th of February, Chicago racked up 326 shootings and 72 murders. That puts the city on the same pace as 2016, which saw the highest murder rate in decades.

On Saturday, 12-year-old Kanari Gentry-Bowers was on a playground in the violent West Englewood neighborhood when she was struck by a stray bullet. About 4 miles away, 11-year-old Takiya Holmes was hit by a stray bullet while seated in the back of a car. Both of their young lives ended.

On Valentine’s Day, a pregnant woman – who is unidentified – began streaming video with her phone on Facebook Live. Her boyfriend, Lazarek Collins, was in the passenger seat and his 2-year-old nephew Lavontay White was in the back.

Collins was a documented gang member. It is believed the bullets were meant for him. However, when Collins was killed, so was little Lavontay. The pregnant woman was shot in the stomach, but survived. Even for Chicago, a city partially numb to the violence, the senseless slaying of a 2-year-old caught on video was horrific.

Tracy Cannon – once associated with the Vice Lords – says it won’t matter. “I don’t care how many police they bring in. It’s not going to stop, man.”

Guys on the street say law enforcement made a bad situation worse. “They locked up these gang chiefs and everything went haywire,” says Charles Winters. Large organizations like the Gangster Disciples and Vice Lords subdivided over unresolved disputes. Absent leadership, cliques within the same gang will often do battle. “Ain’t like it used to be,” says Cannon. “Back then we had structure. Older guys would make us go to school. Even though we was gang banging, we would still go to school.”

Now, it’s a bullet-ridden free for all, with gangsters trying to gain respect by proving themselves to be ruthless. “Kids only care about nice clothes, fast money and how many kills they can get,” says Britt. “When they get a certain amount of kills or when they hurt a certain amount of people, they feared. They got the fear factor going on. The kids nowadays in Chicago, that’s what they want.”

The guy from the Black Disciples says the gang is all he’s even been able to rely on and he’ll never leave gangster life. “If I live by this gun and I live by these drugs, this product that I’m selling, and I’m pushing in this neighborhood. It’s putting food on my table and food in my kids’ mouths and a roof over they heads, then I’m not going to put it down,” he says.

Others say the violent gang life is for kids. If they live into their 20s and stay out of prison some walk away and get jobs. “You just get played out man,” says Cannon. “If you ain’t rich by now, you ain’t gonna get rich selling drugs.”