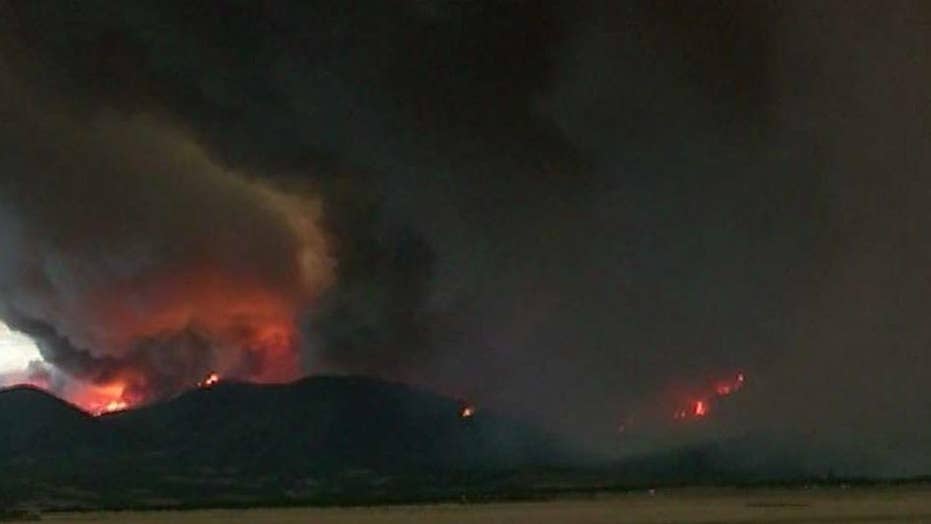 Firefighters battled multiple wildfires that were wreaking havoc across California and other western states on Sunday as some blazes were brought under control while others prompted evacuations.

In parts of southern California, where temperatures have topped 100 degrees, driving winds that sent one inferno through Santa Barbara County vanished in the morning, which allowed authorities to extinguish the charred ruins of about 20 structures.

A mandatory evacuation was reduced and most of the 2,500 people who had fled late Friday would be able to return home.

“There very likely would have been fatalities last night had those evacuations not occurred,” Santa Barbara County Fire Chief Eric Peterson told the Associated Press.

The fire's spread was stopped at about 100 acres in a neighborhood where some houses were destroyed while homes next door were still intact.

Eric Durtschi stood outside his house, where a burned-out car stood in the driveway and kids' bicycles were strewn about.

A firefighter puts water on flames at a home off Fairview Ave., in Goleta, Calif. (Mike Eliason/Santa Barbara County Fire Department via AP)

Durtschi, his wife and six children had left Utah and moved in just a few weeks ago. He said he hadn't yet told his two oldest children their home was gone. He managed to collect his severely burned vintage guns, hoping to salvage them.

Elsewhere in Southern California, firefighters increased containment of a central San Diego County fire that rapidly spread over 400 acres, destroyed 18 structures and damaged eight, and a wildfire in the San Bernardino National Forest was holding at 1.5 square miles and forced evacuation of about 700 homes in the mountain community of Forest Falls.

A helicopter drops water in concert with firefighters on the ground trying to extinguish stubborn smoldering areas of the fire off Fairview Ave., in Goleta, Calif. (Mike Eliason/Santa Barbara County Fire Department via AP)

Among new fires Saturday, a blaze erupted on a steep mountain slope just above the Los Angeles suburb of Burbank and helicopters pounded it with water to try to keep it from getting out of hand.

Southern California fires began erupting Friday as strong high pressure over the West spawned an epic heat wave that saw parts of Los Angeles broil in temperatures up to 117 degrees. There was little relief from the sweltering heat overnight.

Forecasters said the region's siege of heat would gradually ease through the weekend, but the unstable air mass unleashed downpours that triggered flash-flood warnings for the mountains northeast of Los Angeles.

Further up north and just south of the California-Oregon border, the 22,000-square-acre Klamathon Fire in rural Siskiyou County was just 20 percent contained. The body of a resident was found Friday in the ruins of a home, among 15 destroyed structures tallied so far.

Elsewhere in California, the 138-square-mile County Fire northwest of Sacramento was more than half contained Saturday. Ten structures were counted destroyed but damage assessments were continuing.

A woman looks at the charred remains of her mobile home after it was destroyed by a wildfire in the Alpine Oaks Estates where she has lived for more than eight years, in Alpine, Calif., Saturday, July 7, 2018. (Howard Lipin/The San Diego Union-Tribune via AP)

With fires occurring statewide, a Colorado-based Boeing 747-400 supertanker was deployed to California.