A California man accused of killing one person and injuring three others in a shooting at the Chabad of Poway Synagogue last month was charged with 109 hate crimes violations, officials announced on Thursday.

The fatal shooting erupted on April 27 as a service – being led by Rabbi Yisroel Goldstein, who was wounded in the attack – was occurring at the synagogue on the final day of Passover. An 8-year-old girl and her uncle were also wounded and a woman, Lori Kaye, 60, was killed.

The Department of Justice (DOJ), in a news release outlining the charges, said the suspect John T. Earnest, 19, arrived at the place of worship and was “armed with an AR-15 style semi-automatic rifle.”

After opening fire inside, Earnest allegedly fled the scene and was later apprehended, officials said. 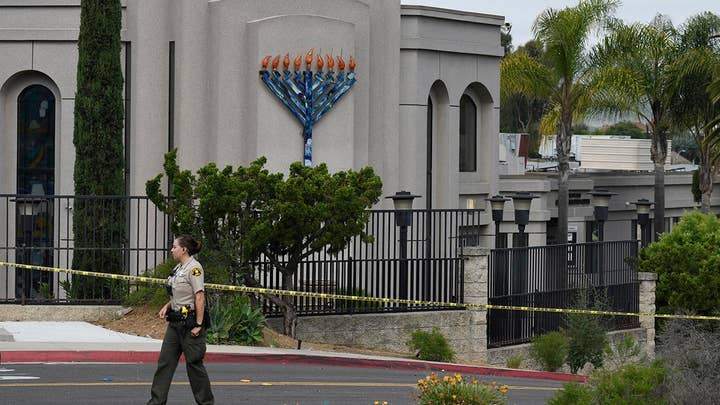 The DOJ also made reference to a manifesto, allegedly with the suspect’s name on it, that was discovered both online and on his laptop.

“In the manifesto, Earnest made many anti-Semitic and anti-Muslim statements,” the news release said. “Specifically, Earnest referred to ‘Jews’ as a race, and he stated his only regret was that he did not kill more people.”

“According to the affidavit, Earnest also admitted in the manifesto to the arson of an Escondido Mosque in March 2019,” it continued.

The aforementioned mosque fire happened on March 24 and surveillance video allegedly “showed a suspect arriving at the mosque in the same type of vehicle Earnest used in committing the attack on the Synagogue,” according to the news release.

“The defendant allegedly claimed in his manifesto that he was inspired by the Tree of Life synagogue shooting in Pittsburgh, Pennsylvania, and the recent shootings at two mosques in New Zealand,” it said.

Earnest was charged with 54 counts each of obstruction of free exercise of religious beliefs using a dangerous weapon, resulting in death, bodily injury, and attempts to kill, as well as for violating the Mathew Shepard and James Byrd Jr. Hate Crimes Prevention Act, officials said.

He was also hit with one count of damage to religious property by use of fire in relation to the attempted arson of the mosque, they added.

“We will not allow our community members to be hunted in their houses of worship, where they should feel free and safe to exercise their right to practice their religion,” U.S. Attorney Robert S. Brewer, Jr. said in the news release. “Our actions today are inspired by our desire to achieve justice for all of the victims and their families.”

In a court appearance last month, Earnest pleaded not guilty to state charges of murder and attempted murder.