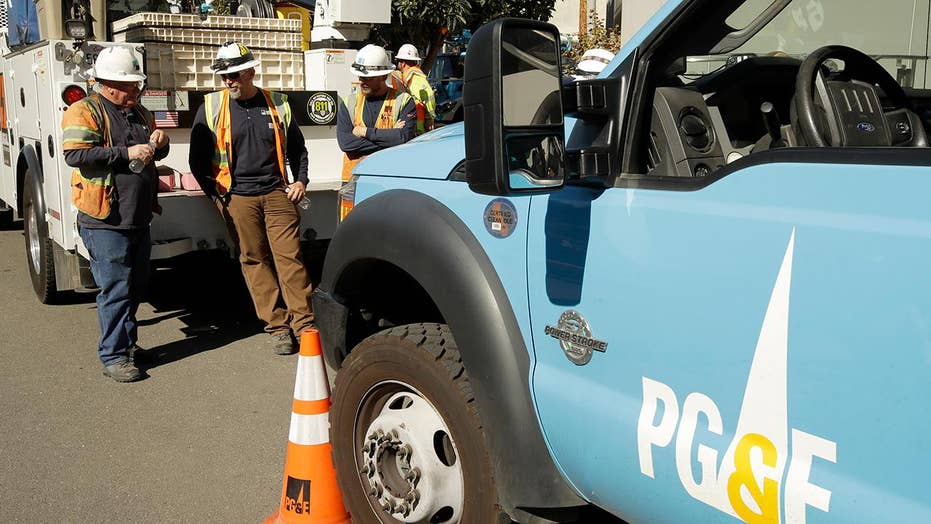 800,000 PG&amp;E customers have been affected by the decision to proactively cut power to prevent wildfires; William La Jeunesse has the latest.

As millions remain in the dark in California on Thursday, mounting frustrations are starting to boil over in the Golden State, with reported vandalism and at least one attack spurring officials to plead with the public to be kind to utility workers on the front lines of the planned blackout.

The largest utility in California, Pacific Gas & Electric Co., began shutting off power late Wednesday in the San Francisco Bay area to about 200,000 customers, adding to the 500,000 homes and businesses that had their power cut earlier in the day. The utility has turned off power to prevent high winds from toppling lines that could then spark deadly wildfires like one last year, blamed on PG&E equipment, that killed 85 people and destroyed the town of Paradise, Calif.

“We understand that this power shutoff is difficult for our customers and communities," Sumeet Singh, vice president, PG&E Community Wildfire Safety Program, said in a statement. "Please check on your neighbors, friends and family and know that we will work safely, and quickly as possible, to restore power across the region."

For business owners and residents across the region, the staggered blackouts and conflicting messages on when the power will go out have fueled its own set of frustrations.

"I feel like they're playing with their customers," Bob Kim, the owner of Young's Market in Contra Costa County, told KTVU.

In Santa Rosa, the Valero gas station Manager Angel Ramos didn't get why the power was cut when there were no strong winds in the city on Wednesday afternoon.

"I think it's bullcrap, we're going to be losing money," she told KGO-TV. "We've got stuff that's going to go bad now that we're going to have to transfer to another store."

Some of that anger has already fueled at least two incidents that appear to be directed at the utility company. A PG&E office in Oroville was closed Wednesday after an act of vandalism after someone threw eggs at the front doors.

A Pacific Gas and Electric office in Oroville, Calif. was closed Wednesday after an act of vandalism. (Orlando Carmona)

A witness told KRCR-TV that it appeared that someone threw eggs at the office sometime late Tuesday or early Wednesday.

A security guard was posted outside the Pacific Gas and Electric office in Oroville, Calif. after an apparent act of vandalism on Wednesday. (Orlando Carmona)

The incident caused a security guard to be posted at the building's front door as broken eggshells were seen on the pavement.

Further north, the California Highway Patrol said it was investigating after a PG&E vehicle was shot at on Interstate 5 in Colusa County Tuesday night after the power shutoffs were announced. The PG&E employee told officers he was driving in a marked company vehicle north of the Maxwell Rest Area around 7:48 p.m. when a white pickup truck pulled up next to him, according to KTVU.

The employee then reported hearing what sounded like a gunshot, and his side passenger window shattered. The CHP confirmed a bullet did shatter the window but did not injure the driver.

Officials have not yet said if the truck was targeted, but PG&E told KTVU in a statement that the safety of its customers and employees is a priority.

"The safety of our customers and employees is PG&E’s primary responsibility. We know that turning off the power for safety is not popular with some, but it is needed for public safety," the company said in a statement to KTVU. "Our employees are working hard to ensure that our system operates safely and that power will be restored quickly after the weather passes. We remind our customers that our employees are your neighbors and they are out in our service area doing their jobs."

California residents are outraged after being left in the dark by PG&amp;E.

A union official told FOX40 that violence against workers is "inexcusable."

"They provide critical services to the public," said IBEW Ninth District Vice President John O'Rourke. "These utility workers are among the unsung heroes who respond without hesitation during catastrophic events."

The mounting anger against the utility has also spurred the wife of utility worker to make a plea to the public to not lash out at line workers. A photo posted by Katie Barbier Photography of her line worker holding his newborn son has gone viral, with over 32,000 shares and 17,000 reactions on Facebook.

"They are simply employees and have no say in any decision making so shouting profanities or resorting to violence towards PG&E workers will never do any good but it would instead hurt someone’s father, mother, brother, sister, husband or wife," Barker wrote.

Although fire agencies had beefed up their crews because of red-flag conditions of extreme fire danger, very few fires were currently burning in California. Only a tiny fraction of acreage has burned, so far, this year compared with recent years, though no one has attributed that to the power cuts.

While many people said the blackouts were a necessity, others were outraged — the word that Gov. Gavin Newsom used in arguing that PG&E should have been working on making its power system sturdier and more weather-proof.

"They're in bankruptcy due to their terrible management going back decades," Newsom said in San Diego. "They've created these conditions. It was unnecessary."

Pacific Gas &amp; Electric has cut power to more than half a million customers in Northern California hoping to prevent wildfires during dry, windy weather throughout the region. (AP Photo/Ben Margot)

At one of the community resource centers set up at the Santa Rosa Fairgrounds, Doug Jones told KGO-TV he was he making sure to charge up batteries on a medical device so he would be able to sleep.