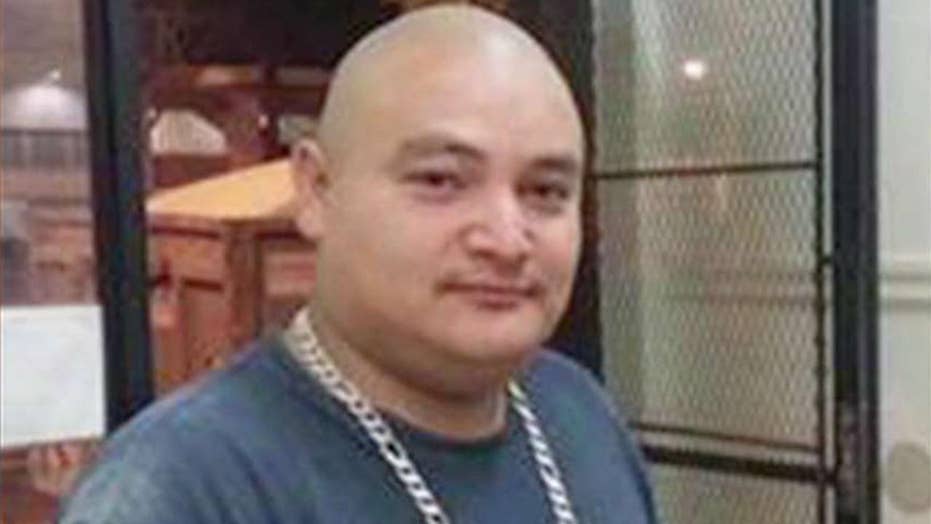 The illegal immigrant arrested for Wednesday’s murder of a California officer has been identified as a member of a Mexican-American street gang with a long history of violence.

Authorities confirmed Gustavo Perez Arriaga, 33, was affiliated with the Surenos gang after announcing Friday that he had been arrested Bakersfield, Calif., following an intensive manhunt.

Perez Arriaga, a Mexican national, has been charged with killing Newman Cpl. Ronil Singh after the officer stopped him Wednesday on suspicion of drunk driving.

Investigators previously said that a photo of a man sporting a “$ur3no$” tattoo on his right arm was the suspect in Singh's murder. Authorities said Perez Arriaga had two prior arrests for drunk driving.

The Surenos gang’s tentacles have spread from Southern California to other parts of the U.S. with members engaged in a number of crimes, including murder, extortion, narcotics trafficking, prostitution, human smuggling and robbery.

"It's an umbrella group here in Los Angeles, the Surenos gang -- 'Surenos' is Spanish for 'southerners' -- but it's the street gangs that affiliate with the prison gang the Mexican Mafia," an Immigration Customs and Enforcement Special Agent in Charge Claude Arnold told ABC 7 Los Angeles in 2014.

At the time, ICE announced hundreds of arrests in a nationwide crackdown targeting the gang — the agency’s largest ever against the Surenos - called Project Southbound.

The Mexican Mafia, with about 250 members, has been described as a powerful syndicate formed in the style of the Italian Mafia. Surenos members take orders from the Mexican Mafia.

“The gang now has more than 30,000 members in the United States and its numbers are growing,” ICE Principal Deputy Assistant Secretary Thomas S. Winkowski said four years ago.

One of those arrested in the crackdown was Sureno gang member Cesar Lisandro Anaya, 27, who was arrested in Dallas. He was wanted in El Salvador for aggravated homicide, extortion and gang activity.

Surenos gang members claim the color blue and the number 13—the number 13 being a reference to the thirteenth letter of the alphabet—M—which is the symbol of the Mexican Mafia.

Prosecutors said those who belong to the gang utilize phrases such as “Southside” and “Sur” in their graffiti and tattoos to express their gang affiliation.

Various Norteno gangs are the principal rivals of the Surenos.

NEW ARRESTS IN DEATH OF CALIFORNIA POLICE OFFICER; MURDER WEAPON MAY HAVE BEEN FOUND, AUTHORITIES SAY

In April, a federal indictment in San Francisco spelled out the roles 10 Surenos gang members played in seven murders, dating to 2006, and a number of nonfatal shootings, including two that left the victims paralyzed.

One of the murder victims was 16-year-old Salvador Cortez, who was shot and killed in 2009 as he stepped outside his home.

ICE released this photo in announcing hundreds of arrests that were part of a crackdown in 2014 targeting the Surenos gang.  (ICE)

Cortez was celebrating a family member’s birthday at the time, according to the East Bay Times. He was shot in the head.

The indictment says Juan “Huero” Gallardo, 29, shot Cortez because he suspected the teen of being a rival gang member.

The case against Gallardo, who was locked up without bail, is pending.