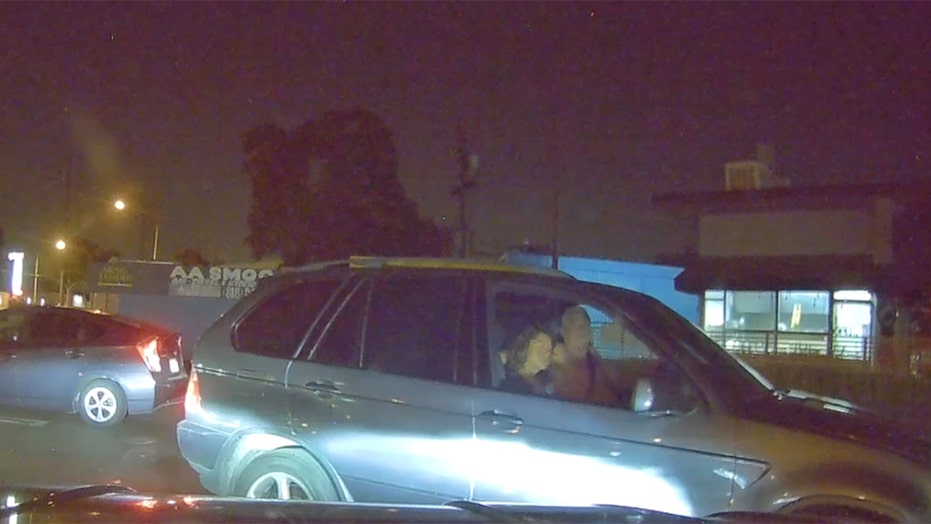 California authorities were searching Sunday for a man who allegedly exposed himself to an 11-year-old boy and tried to lure him into his car in a parking lot.

The incident took place in Glendale on the night of Oct. 17, according to police. A woman and her young son were sitting in their vehicle, when the boy got out of the car.

As the 11-year-old was standing in the parking lot, a man and a woman in another vehicle approached him, the local police department said in a news release Friday. "The male was completely naked and attempted to get the child’s attention by waving him toward his vehicle," investigators said.

Investigators are searching for a man and woman in their 40s or 50s who allegedly tried to lure an 11-year-old boy into their vehicle in Glendale, Calif., on Oct. 17. (Glendale Police Department)

“They rolled their car right next to mine, and cornered in and tried to call him to their car,” the boy’s mother told KCBS-TV. When the boy's mother saw what was happening, "she yelled at the man and woman and they drove out of the parking lot and out of sight."

“My son, right away, he started crying. It was awful, you know?" the child father's said. "They had intentions in their head, and I’m just really glad that they didn’t follow through."

Dashboard camera footage released by police caught a glimpse of the man and the woman who allegedly tried to pick up the child. The man is described as in his 40s or 50s with white or gray hair, and the woman was described as similar in age, with dark shoulder-length hair.

Investigators described the vehicle as a 1999-2006 gray or silver BMW X5, and the family believes the license plate included the letters “L-M-N” OR “L-N-M."

Anyone with information on this incident is urged to contact the Glendale Police Department at 818-548-4911 or Los Angeles Regional Crime Stoppers at 800-222-8477.