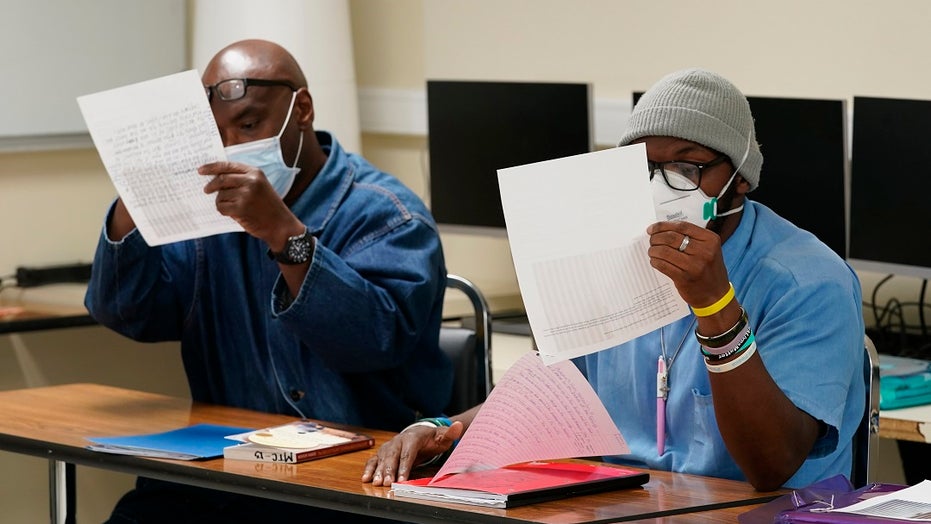 A group of unique college California students are trying to turn their lives around at an even more unique educational institution.

Behind the walls at one of the state's most infamous prisons, inmates are taking classes in literature, astronomy, American government, precalculus and others to earn an Associate of Arts degree. The school, Mount Tamalpais College at San Quentin State Prison, is named for a mountain near the correctional facility.

The school became accredited in January after a 19-member commission from the Western Association of Schools and Colleges determined the extension program based at San Quentin for more than two decades was providing high-quality education.

Incarcerated students look at the photograph "The Falling Man," that was part of a discussion during a Mount Tamalpais College English class called Cosmopolitan Fictions at San Quentin State Prison April 12, 2022, in San Quentin, Calif. The community college, the first in California with a campus inside a prison, is the latest addition to San Quentin's numerous rehabilitation programs that have made it a desired destination for inmates throughout the state.  (AP)

The college is part of dozens of job-training and self-help programs available to the medium-security prison's 3,100 inmates.

"I wish I had learned this way coming up; instead I was in special ed my whole life," said 49-year-old Derry Brown, whose English 101 class "Cosmopolitan Fictions," was discussing "The Reluctant Fundamentalist," a novel by Mohsin Hamid.

The new designation will allow the school to hopefully allow it to expand and catch the attention of donors, said President Jody Lewen. Currently, it can accommodate 300 students each semester and another 200 are on a waiting list.

"There’s also moments of success when a student realizes that they’ve crafted a really elegant paragraph in their essay, and they’ve made some interesting points. As with any student, regardless of where you are, you can see how that helps them build confidence," Arwine said.

Many of his students dropped out of school at an early age or went to dangerous public schools, he said.

Jesse Vasquez, 39, said he was serving multiple life terms for attempted murder, a drive-by shooting and assault with a deadly weapon at a maximum-security facility when he read about the program in the San Quentin News and decided he would transfer there one day.

Vasquez had taken correspondence college programs at other prisons but studying in a classroom at San Quentin helped him see his potential and he realized he was at a "hub of rehabilitation."

He said having the students be enrolled at an actual community college will be an even greater incentive for them to pursue higher education and hopefully encourage other prisons to have their own colleges.

"All of a sudden, more people might be more open to the idea of, ‘Hey, what if we try this revolutionary idea somewhere else?’" he said.