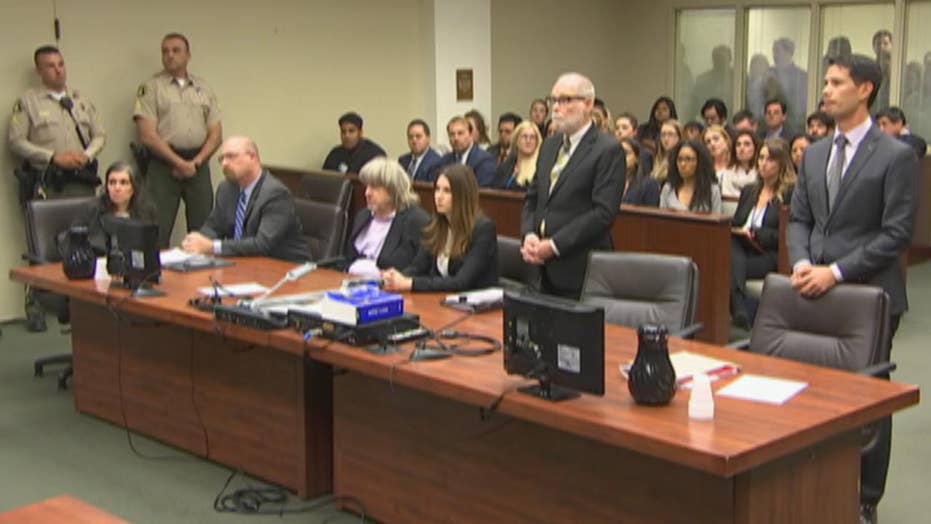 Raw video: David and Louise Turpin were each ordered held on $12 million bail after pleading not guilty in a California court to charges that they tortured and abused their 13 children for years.

The sister of the mom charged in the California "house of horrors" case says she, her sister and their cousins were routinely sexually abused during their childhood by a close family member -- and talk of the molestation was swept under the rug.

Elizabeth Flores told Dr. Oz in a pre-taped segment of his show set to air Tuesday that Louise Turpin, her cousin Patricia, and others, were targeted by a man she described as a wealthy property owner who is still alive today and is believed to be turning 99 in March. The man was not identified by name in any of the clips made available online.

“So, a family member, a very, very close family member that we’re with daily, abused all the cousins and it was just swept under the rug, I guess? You don’t talk about it,” Flores said. “If it comes up, it was like we were lying or something…so we just didn’t talk about it, and we were made to be around this person daily.”

Turpin, along with her husband David Turpin, face sentences of 94 years to life in prison if they are convicted of charges ranging from torture to abuse. Their 13 malnourished children, who range in age from 2 to 29, were rescued from the foul-smelling California home on Jan. 14. Prosecutors have accused the couple of shackling the children up for months at a time.

Patricia, Flores’ cousin, told Dr. Oz she tried to tell her parents about the decades-old sex abuse, but they “didn’t do anything” or stand up to him.

“I felt like I have to say this, so, you understand how our childhood was created because the public doesn’t understand,” Patricia said. “They think, ‘why didn’t you see things' or whatever. We were trained, all of us girls were trained to be fake or to not come forward. That we had to be a certain way all the time.”

Elizabeth Flores said if she could deliver a message to Louise, she would let her know she loves her and she's always her sister -- but she still wants answers about the alleged abuse of Louise's children.

“I don’t understand how you can go from what I grew up with her knowing her as, to what she is known as today,” Flores said.

Patricia cautioned, however, that “even with the abuse” Louise reportedly suffered herself, “there is no excuse” for what she's now alleged to have done.

A motive in the 'house of horrors' case is still not known, but Riverside County District Attorney Mike Hestrin told the Associated Press last week the children are slowly opening up to investigators.

“Victims in these kinds of cases, they tell their story, but they tell it slowly. They tell it at their own pace,” he said. “It will come out when it comes out.”

A judge last week also signed off on a protective order prohibiting the Turpins from contacting their children, except through lawyers or authorities, for a minimum of three years.