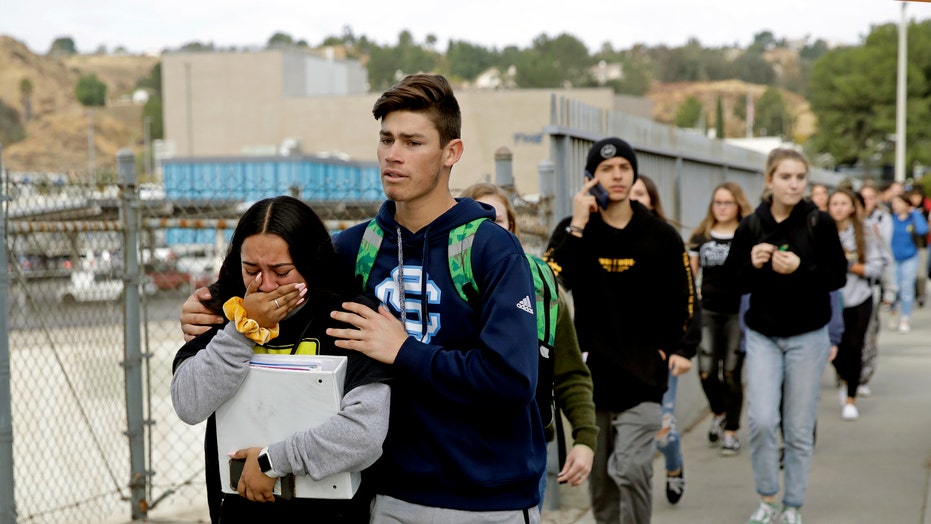 The 16-year-old who shot five classmates last week at Saugus High School in Santa Clarita, Calif., before turning the weapon on himself, used an unregistered, untraceable "ghost gun" assembled by hand from various parts, according to Los Angeles County Sheriff Alex Villanueva.

It was unclear who assembled the weapon and authorities did not rule out Nathaniel Berthow, the gunman, as the architect of the.45 caliber handgun.

The Nov. 14 shooting claimed two lives and three were injured.

FILE - This Nov. 14, 2019 file photo shows students being escorted out of Saugus High School after a shooting on the campus in Santa Clarita, Calif.(AP Photo/Marcio Jose Sanchez, File)

The teen’s deceased father owned an arsenal of weapons, many unregistered, which were seized by law enforcement. Mark Berhow, his father who enjoyed big-game hunting, died in 2017 of a heart attack in 2017.

Ghost guns are a growing problem for law enforcement. The parts are relatively easy to obtain and the guns do not take much expertise to build. So even though California has some of the strictest gun laws in the country, they are only based on traditional firearms made by manufacturers where ownership can easily be traced.

In Southern California, one-third of all firearms seized are ghost guns.

"Congress and state legislatures enact all these crimes about gun registration but now the gun industry is creating a way to just bypass the entire thing by creating a mechanism to manufacture weapons yourself," Villanueva said.

Under current law, anyone can purchase gun kits and assemble them. Without the background checks needed to purchase a fully assembled weapon from a licensed dealer, minors or those otherwise prohibited from carrying a weapon see it as a convenient alternative.

One police officer said it was “ridiculously easy” to build a ghost gun after his agency experimented in building their own Glock-replica handgun from parts they ordered online in an experiment.

“It was ridiculously easy to do it,” Thomas Gronenan, detective sergeant with the Suffolk County Police Department in New York, said. “It’s scary because anybody — convicted felons, people with psychological issues — can order it online.”

It remains a mystery what drove Berhow to walk into school and shoot five of his peers at random. Berhow ran cross country, was a Boy Scout and had a girlfriend. He showed no signs of violence and his mother didn’t have any idea of her son’s plans, according to Villanueva.

The sheriff’s department is currently working with federal authorities to unlock the gunman’s phone.

Anne Muehlberger, 15, and Dominic Blackwell, 14, were killed in the violence. The three other injured students were hospitalized but have since been sent home.