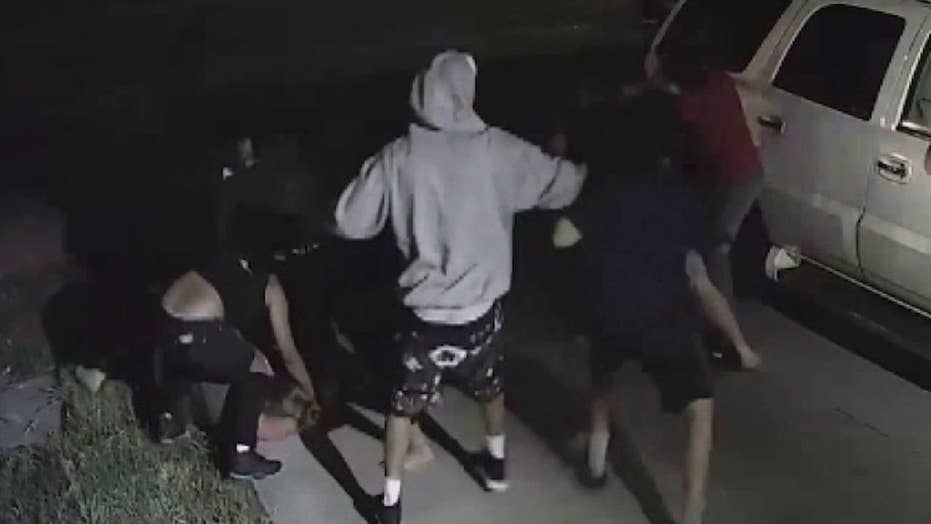 Couple brutally attacked by a group of teenagers outside their home in Stockton, California

The husband and wife were attacked taking out the garbage by a small group of teenagers, police are hopeful someone will come forward with the identities of the suspects.

A couple in California taking out the trash over the weekend ended up victims of a "very brutal" attack that was caught on camera, according to officials.

The Stockton Police Department said on Facebook the incident happened Sunday around 11:30 p.m. when the group of unknown assailants attacked the couple in the 900 block of Henry Long Drive in the Weston Ranch area of the city.

Video released by the department shows a woman being kicked and punched around her head and face area multiple times.

"If you look at the video, there’s about four to five people, both males and females," Stockton Police spokesman Joe Silva told FOX40. "And we believe that they possibly are known to that neighborhood."

Video: Grant Brown, 19, saves 6-year old boy from a dog attack in Conroe, Texas. The dog has been given to animal control and its owner has been cited.

The couple, who have asked to not be identified, said the confrontation started after they asked a group of teenagers to move along while they were taking out the trash.

The woman, who now has two black eyes, said the attack began when one of the men in the group sucker punched her. Stockton police said she was treated at a local hospital for her injuries and released after the attack.

Neighbor Patrick Varvell told FOX40 the couple ran next door after the attack, and at first he thought the woman had spilled a drink on herself.

"She just comes running over asking for help. So I, of course, let her into the house here and turn the lights on and found it was not a drink," Varvell said. "She was covered in blood."

The woman told FOX40 that she and her husband are in a lot of pain, but won't be bullied out of their neighborhood

Police said in the surveillance video, there appeared to be 4 to 5 male and female suspects.

"The suspects are believed to be known to the area," Stockton police said. "During the assault, the group of suspects also vandalized the victim's vehicle."

A $10,000 reward is being offered for any information leading to an arrest.