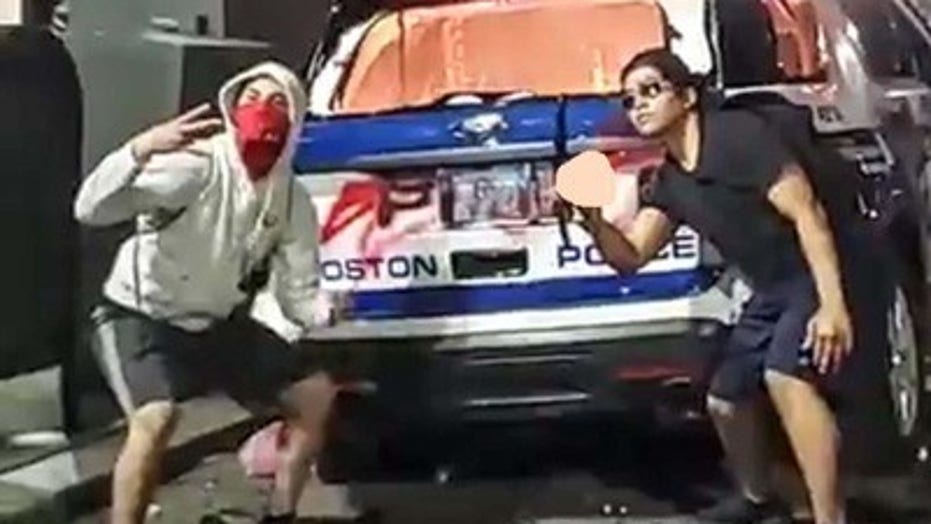 Boston police say they have taken a 15-year-old into custody after the FBI released images earlier this week of two men posing in front of a burned-out cruiser.

The unidentified individuals, the FBI’s Boston Division had said, “may have information relevant to the ongoing investigation into the vandalism and arson of a Boston Police Department cruiser” on May 31.

COLLEGE IN BOSTON APOLOGIZES FOR LETTING POLICE OFFICERS USE ITS BATHROOMS

The FBI's Boston Division, the Boston Police Department and the Boston Fire Department -- Fire Investigation Unit are seeking the public's assistance in finding these two men wanted in connection to the burning of a police vehicle on May 31. (FBI)

The 15-year-old, who was arrested Thursday in Framingham on a Boston Juvenile Court warrant, is now facing charges of arson of a motor vehicle and inciting a riot, police say. His name is not being released because he is a minor, WFXT reports.

“Boston Investigators wish to thank the F.B.I. Boston Division and A.T.F. for their assistance in this case as well as everyone that came forward to assist in identifying this individual,” police added in a statement.

The FBI had said on May 31, “two Boston police officers responded to a call for assistance and parked their vehicle in the area of the Beantown Pub near Suffolk University.”

“Shortly thereafter, several individuals vandalized the cruiser, breaking its windows, and eventually setting it on fire,” it added.