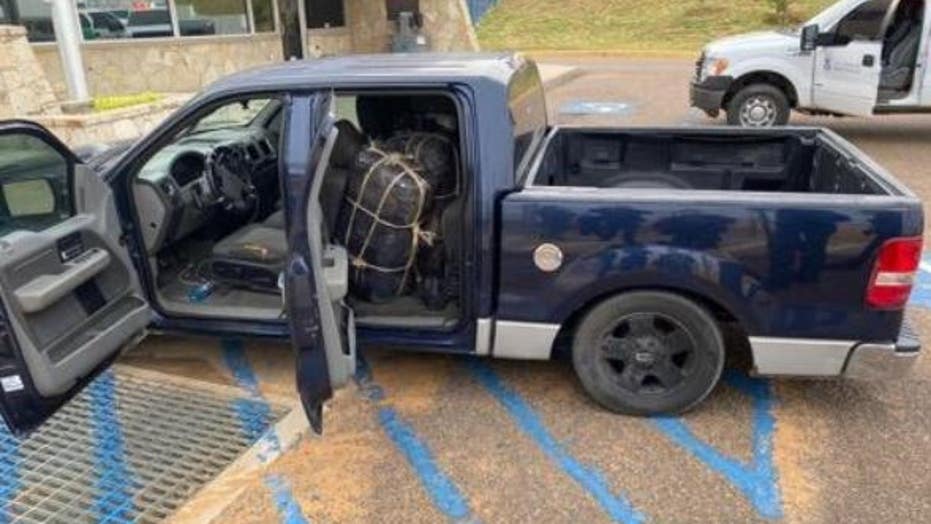 Border Patrol agents on Friday disrupted a narcotics smuggling attempt, seizing hundreds of pounds of marijuana inside of a pickup truck along the Texas-Mexico border, authorities said.

The incident took place Friday afternoon in the southern Texas town of Laredo, which lies along the Mexico border.

Border agents in Texas discovered 300 lbs. worth of marijuana from an abandoned SUV near the Mexico border.  (CBP)

Agents received a report regarding a blue pickup truck that was suspected of being involved in illegal activity at a local range, according to a press release from the U.S. Customs and Border Protection.

The agents found the truck traveling at a high rate of speed southbound on Mines Road. They attempted to pull over the vehicle, but the driver reportedly failed to yield, giving way to a pursuit.

The driver continued until reaching the World Trade Bridge, which connects the United States and Mexico over the Rio Grande River. He then abandoned the pickup truck and fled into Mexico, CBP said.

The agents inspecting the abandoned vehicle found marijuana weighing nearly 300 lbs. and valued at $238,960. The contraband was turned over to the Drug Enforcement Administration.

Earlier this month, border agents thwarted another drug smuggling attempt in Laredo. After leading agents on a chase, the driver of an SUV drove into the Rio Grande River and fled into Mexico, CBP said. Agents with Laredo Sector Marine Operations recovered five bundles of marijuana from the submerged vehicle.