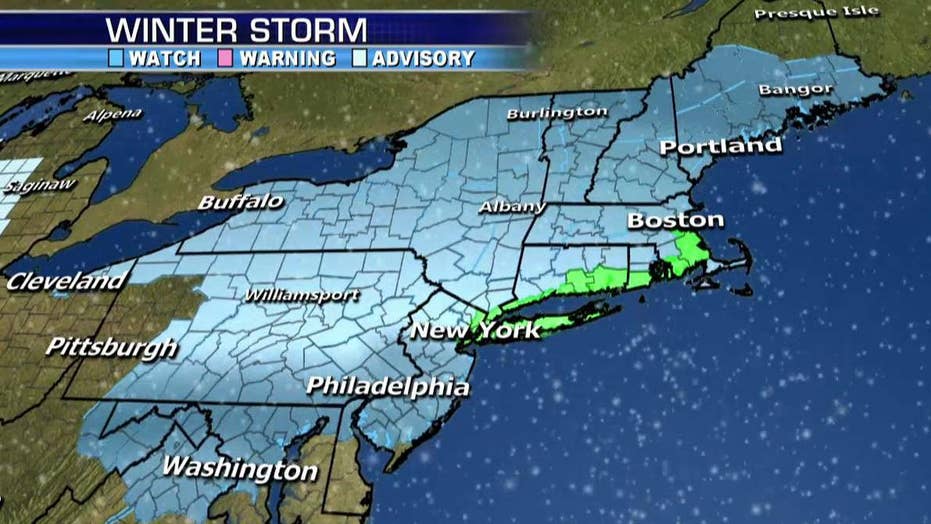 National Weather Service officials said there also is a winter storm watch for a larger area that includes much of New Jersey, Pennsylvania, upstate New York and New England.

The severe weather comes just a week after the region saw temperatures climb into the 60s. The chilly weather and snow some areas got on Friday is expected to be just a teaser.

"It's a noticeable difference. It's going to be a cold week," said Brian Hurley, a meteorologist at the weather service's Weather Prediction Center in Maryland.

Carlie Buccola, a weather service meteorologist based on Long Island, said a snowfall of 12 to 18 inches is predicted for the area along with sustained winds up to 30 mph with gusts up to 50 mph. Visibility could be a quarter mile or less, Buccola said.

New York Gov. Andrew Cuomo announced Sunday that the New York State Emergency Operations Center will be activated Monday evening, with stockpiles of sandbags, generators and pumps at the ready.

The lower Hudson Valley and northeastern New Jersey could also get 12 to 18 inches of snow, Buccola said. The blizzard watch is not extended to those areas because high winds and low visibility are not expected.

Washington is not officially under a winter storm watch but Hurley said the city could get 4 to 8 inches of snow.