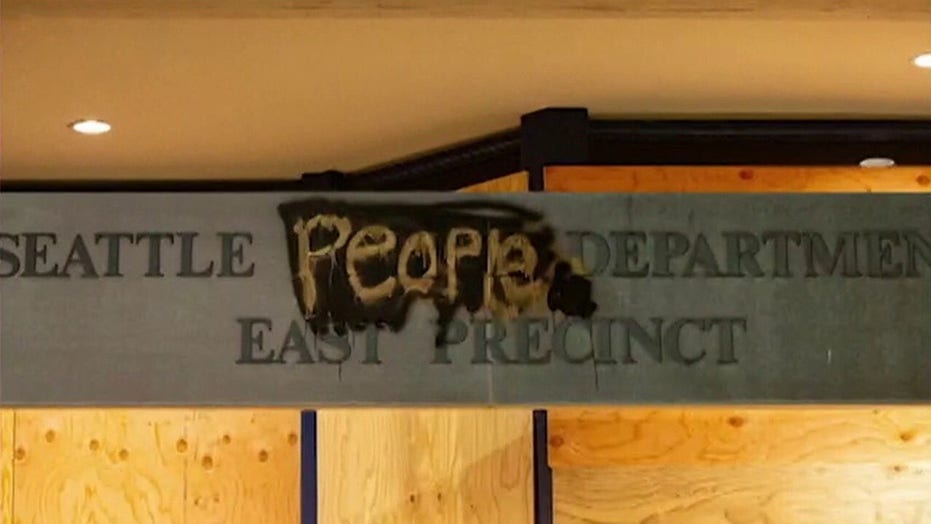 Inside Seattle's 'autonomous zone' around the city's abandoned police precinct

Editor’s Note: A FoxNews.com home page photo collage which originally accompanied this story included multiple scenes from Seattle’s “Capitol Hill Autonomous Zone” and of wreckage following recent riots. The collage did not clearly delineate between these images, and has since been replaced. In addition, a recent slideshow depicting scenes from Seattle mistakenly included a picture from St. Paul, Minnesota. Fox News regrets these errors.

Protesters inside the self-declared autonomous zone in downtown Seattle booed and heckled members of the African American Community Advisory Council Thursday afternoon as the group told demonstrators they had "hijacked" the message of Black Lives Matter.

The council works to foster relationships between the Seattle Police Department and the community, a necessary liaison, particularly in the climate of mounting tension against police following the death of George Floyd in Minneapolis.

A protester talks with Seattle Police assistant chiefs Adrian Diaz, left, and Deanna Nollette, center, inside what is being called the "Capitol Hill Autonomous Zone" in Seattle.  (AP)

“The thing is, you have hijacked this! You have taken the meaning away!” a woman from the council said, addressing demonstrators inside the “Capitol Hill Autonomous Zone,” (CHAZ)-- a six-block region, which includes a police precinct-- that has been taken over by protesters.

After weeks of protests, Seattle demonstrators successfully ousted police officers from the East Precinct, forcing them to shutter the building and leave, and attempts at negotiating a police presence have been unsuccessful.

“Black lives do matter but there are also black lives that are police lives,” a woman from the council said, according to reports by Komo News. “They feel the same way that you do.”

The woman was booed and demonstraters grabbed other microphones and began talking over her, the news outlet reported.

Mark Henry Jr., center, a Black Lives Matter leader, speaks into a megaphone in a doorway of the Seattle Police Department East Precinct building, which has been boarded up and abandoned except for a few officers inside, Thursday, June 11, 2020, in Seattle.  (AP)

AACAC Chair, Victoria Beach lambasted the city's mayor, Jenny Durkan, calling her "cowardly" for opening up the streets "to all of the mayhem,” she told the local news outlet.

The precinct's police chief Carmen Best told reporters on Thursday that she was outraged by the events unfolding and said "leaving the precinct was not my decision."

Sources told Fox News Best and Durkan have been at loggerheads over the decision to forfeit the portion of downtown Seattle to protesters, who have posted signs that say "cop-free zone" and “You are now leaving the USA.”

People walk near a sign that reads "You are entering free Capitol Hill," Thursday, June 11, 2020, inside what is being called the "Capitol Hill Autonomous Zone" in Seattle. (AP)

Negotiations between protesters and the police have been at a standstill as authorities struggle to identify who is at the helm of the movement inside the autonomous zone.

Police officials attempted to enter the East Precinct on Thursday but were jeered by protesters, who have reportedly set up checkpoints with armed guards to keep law enforcement officials away. Other protesters attempted to escort officers to the precinct, to the dismay of their fellow demonstrators.

Cyclists raise their fists as they gather at Cal Anderson Park after taking part in the "Ride for Justice," Thursday, June 11, 2020, Seattle. People rode to the park and then took part in a rally to protest against police brutality and racial inequality. (AP)

Since police have left the area, officers say their response time to incidents in the city have tripled because they are unable to access the area for calls for help.