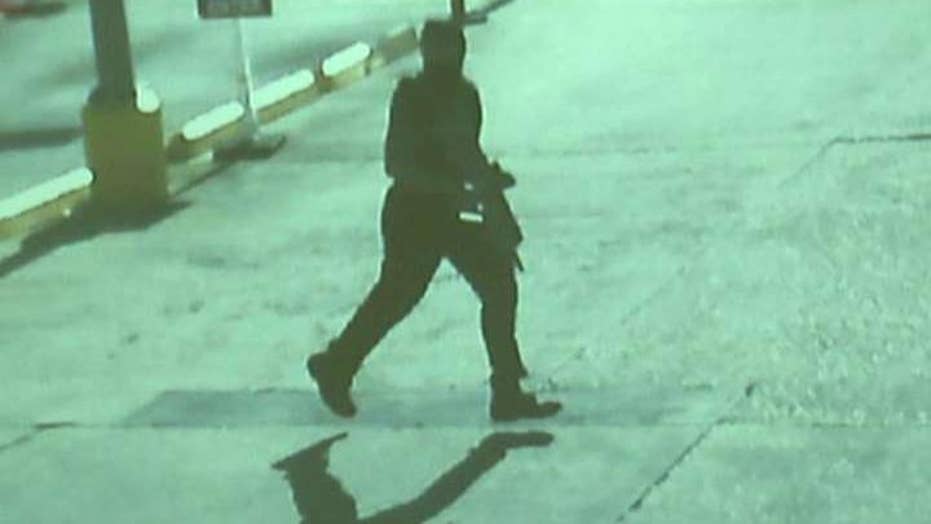 The Marine who "targeted and assassinated" law enforcement officers in Baton Rouge, Louisiana brought three guns and scoped out areas where he could specifically attack police, investigators revealed Monday as they showed surveillance photos from the crime scene.

The images showed 29-year-old Gavin Long outside the gas station and car wash where he shot three officers and wounded three others on Sunday. A Baton Rouge SWAT team responding to the gunfire shot and killed Long from 100 yards away, State Police Superintendent Col. Mike Edmonson told reporters in a news conference.

The shooter used a rifle to kill the three officers, Edmonson said, adding that investigators also recovered a handgun and a second rifle. He said they were working with the Bureau of Alcohol, Tobacco, Firearms and Explosives to determine how he obtained the weapons, and also were looking into his social media activity.

Long was from Kansas City and had been in Baton Rouge for six days, Edmonson added. Investigators said there were no other shooters at the scene, but they were still unsure whether Long had any kind of help.

"This investigation will leave no stone unturned," Louisiana Gov. John Bel Edwards said. "This was a diabolical attack on the very fabric of society."

Using an aerial photo of the crime scene, Edmonson walked reporters through a timeline of the shootings. He said one of the officers Long shot was sitting in his car.

Baton Rouge Police Chief Carl Dabadie, Jr. also defended law enforcement amid criticism of so-called "militarized tactics" by police in response to violent protests in cities such as Ferguson, Missouri. Describing the Baton Rouge gunman and the man who shot officers in Dallas last week, the police chief said, "we are up against a force that hasn't played by the rules."

Of the officers who survived the shooting, one was released from the hospital Monday. Two others remained hospitalized, one still in critical condition.

Documents show that Long sought to change his name last year to Cosmo Setepenra. A website using that name links to online books about nutrition, self-awareness and empowerment. The man describes himself as a "freedom strategist, mental game coach, nutritionist, author and spiritual advisor."

In a video apparently posted to an online account belonging to Long on July 10, the person making the post says he's speaking from Dallas after five police officers were fatally shot there during a protest of the deaths of black men in encounters with law enforcement. The man also discusses protests in Baton Rouge and what he perceived as oppression.

He says: "You've got to fight back. That's the only way a bully knows to quit." In an earlier video, the man says that if anything ever happens to him, he doesn't want to be linked to any groups and mentioned once belonging to Nation of Islam.

In documents seeking the name change, Long also referred to himself as a member of a black separatist group known as the Washitaw Nation.

The attack unfolded less than two weeks after Baton Rouge police shot and killed Alton Sterling in a confrontation that reverberated nationwide.

Long served in the Marines from 2005 to 2010, reaching the rank of sergeant. He deployed to Iraq from June 2008 to January 2009, according to military records.

While in the military, Long was awarded several medals, including one for good conduct, and received an honorable discharge. His occupational expertise was listed as "data network specialist."