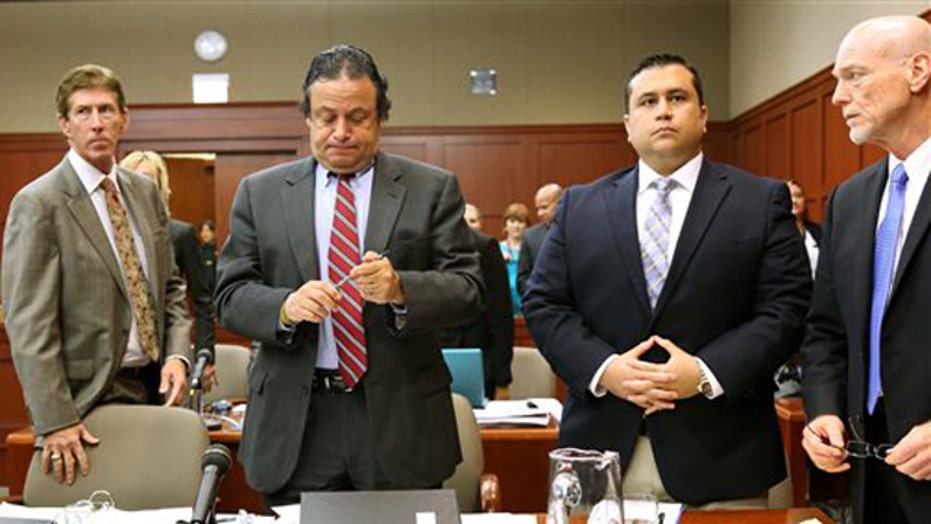 Jury selection is expected to take all week, if not longer, as prosecuting and defense attorneys quizzed dozens of potential jurors about their knowledge of the case.

The case has sparked national interest, and one potential juror even suggested to attorneys that they're going to have a hard time finding jurors who haven't heard about the case and can only hope they find residents who can keep an open mind.

"I haven't lived under a rock for the past year," said Juror B-51. "It's pretty hard for people not to have gotten some information."

Judge Debra Nelson has said she will keep the identities of selected jurors anonymous, but she rejected a defense request to sequester the initial jury pool of 500 residents. The familiarity of the first four jurors questioned Monday ranged from specific details of the February 2012 shooting to vague outlines of the case and the circumstances that led to Martin's death.

Zimmerman, 29, is pleading not guilty to second-degree murder charges in the death of 17-year-old Trayvon Martin. If convicted, Zimmerman could face life in prison.

Jurors were asked to fill out questionnaires about themselves and their ability to serve before they were verbally questioned. Prosecutors and defense attorneys are trying to find six objective members and four alternates. In Florida, 12 jurors are required only for criminal trials involving capital cases, when the death penalty is being considered.

Judge Nelson said the jury selection would alternate with the continuation of a hearing to determine whether she will allow the testimony of voice-recognition experts who say they might be able to identify who was screaming on a 911 tape recorded during Zimmerman's confrontation with Martin.

Zimmerman admitted to shooting Martin in the chest with his 9-mm. handgun after calling police, exiting his pickup truck to follow Martin, and then getting into a fight with the 17-year-old on a rainy night inside a gated community on February 12, 2012.

But Zimmerman also says the teen circled back and attacked him as he walked back to his truck – punching him in the face and slamming the back of his head into the sidewalk.

Photographs taken that night show Zimmerman with a broken nose, bruises and bloody cuts on the back of his head.

"We seek a fair and impartial trial," Tracy Martin said. "We ask that the community continue to stay peaceful as we place our faith in the justice system."

George's brother, Robert Zimmerman, Jr., told reporters Monday that his family is "very confident in the outcome of the case."

"Not only do they have to prove that this was a murder as they allege; they also have to prove simultaneously that it could not have been self-defense," he said.

On Monday, Nelson denied a request by defense attorney Mark O'Mara to delay the trial because he said needed several more weeks to prepare.

The case is expected to last about six weeks.

Prosecutors are expected to argue Zimmerman racially profiled Trayvon Martin. They also are expected to say he started the fight and was a would-be police officer overstepping his authority as a watch captain, patrolling the Orlando-area community where he and the fiancée of Martin’s father lived.

"The state's narrative is going to be ... Zimmerman was a powerful neighborhood watchman, a wanna-be officer who liked to use his authority," said Randy McClean, a Florida defense attorney.

Defense attorney Mark O’Mara will need to show his client feared for his life and that race was not a factor in following Martin or shooting the teen, whose head was partially covered by a hoodie.

"O'Mara's challenge is to show Trayvon wasn't profiled, that Zimmerman either saw something that looked suspicious or something else that caused him to make contact with Trayvon," McClean also said.

O'Mara has decided not to invoke a "stand your ground" hearing in which a judge alone would decide whether to dismiss the case or allow it to proceed to trial.

"This case, in my opinion and in my view of the facts, is a clear, straightforward self-defense case based upon the forensic evidence," he said.

Nelson has already ruled that defense attorneys won't be able to mention Martin's past marijuana use, suspension from school and past fighting during opening statements, though Nelson left open the possibility that the defense could try again later during the trial if it could show relevance.

Such a situation could arise if prosecutors attempt to portray Martin as an angelic kid.

Jurors will want to hear from Zimmerman.

"I can't see how he doesn't [testify]," said David Hill, another Florida defense attorney. "He's the only one who can say `I was scared for my life and here's what happened.’ ”

Another crucial witness will be Martin’s female friend, who was talking with him by cellphone.

She says Martin told her during that conversation that someone was following him and that she also heard a brief exchange between him and someone before the phone was cut off.

Martin was shot shortly afterward. But O'Mara already has called into question her credibility, accusing her of lying about missing Martin's funeral because she was in the hospital.

Prosecutors have refused to comment about the case outside the courtroom, but lead prosecutor Bernie de la Rionda indicated at a recent hearing he was well aware of the pressures the case's high profile is putting on all parties involved. Reporters from national media groups are attending the trial, and areas outside the courthouse have been designated for expected protests.

"We want to make sure this trial is tried in a courtroom and not outside a courtroom," de la Rionda said.