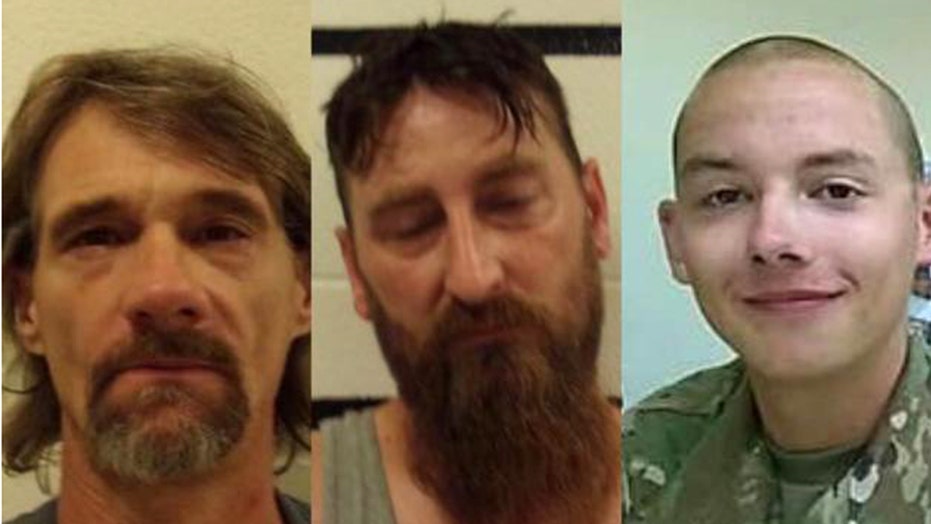 An active-duty Army man has been arrested with two others in the death of his stepfather in Oklahoma last month.

Investigators opened an investigation after finding the body of Bob Dalpoas, 49, of Haileyville, Okla., on the Fourth of July in a cemetery, according to reports.

“We had a theory from pretty much the beginning that involved these three,” said Randy Hass, a detective in the sheriff’s office, according to the station.

Morgan was taken into custody at Joint Base Lewis-McChord in Washington State where he holds the rank of private first class, the station reported.

Jimmy Nace, 46, of Haileyville, and Matt Vermillion, 40, of Krebs, were the other men charged. They were jailed in McAlester.

An arrest affidavit says Morgan told Army investigation that Dalpoas went down after a fight on July 3 with Nace in Haileyville, The McAlester News-Capital reported Thursday.

The affidavit says that at the cemetery, Morgan told the investigators that he and Nace grabbed a concrete bench and dropped it on Dalpoas’ head twice, the paper reported. Nace then dropped the bench on Dalpoas head a third time.

Morgon said Nace then set the man’s body on fire with lighter fluid to “destroy evidence,” according to the affidavit, the paper reported.

Nace and Vermillion were being held in the Pittsburg County Jail.