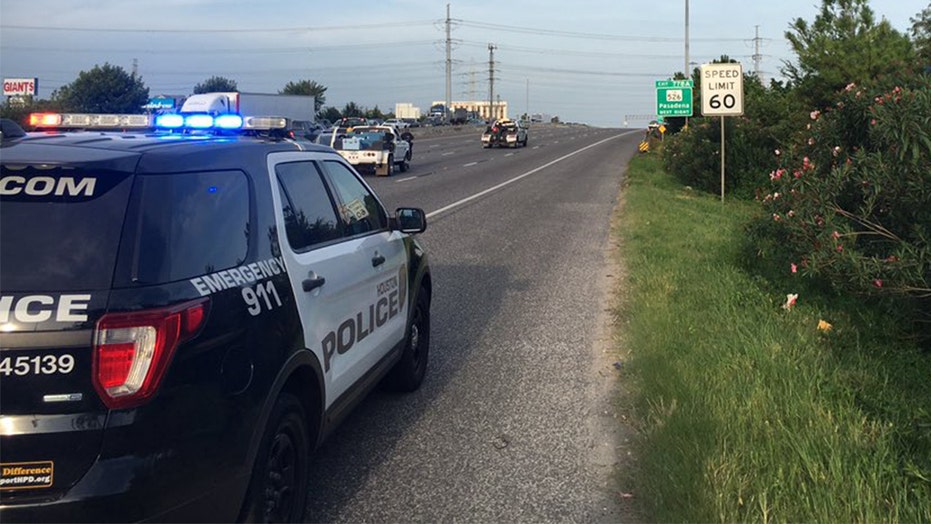 Police in Texas are searching for a gunman who opened fire on a freeway in Houston during the evening rush hour Thursday, killing a driver and his passenger.

The vehicle that was hit briefly came to a rest at the top of a hill before starting to roll downhill.

Two people got out of the vehicle that struck the first vehicle and one of the two began firing at the car as it rolled downhill. When the vehicle came to a stop, the shooter "made it all the way to the car" and continued firing rounds into the front windshield, police said.

The driver and passenger in the vehicle, whose identities have not been made public, were pronounced dead on the scene despite efforts by Good Samaritans with EMS training who attempted CPR. Police also said narcotics were found in the victims' car.

One witness who was driving by as the scene unfolded, had a pistol in his own vehicle. The witness told police he saw the shooter shooting into the vehicle and saw "the suspect turn towards him."

"He thought he was gonna be fired at," Dobbins said. "[He] had no idea what was going on. So he fired several rounds at the suspect. He doesn't know if he hit the suspect, but it did cause the suspect to run, run back up the hill and get in the vehicle, and leave the scene."

Police believe there are two suspects at large, but only one shooter. Authorities are unsure what type of gun was used by the shooter, but witnesses described seeing a long rifle, which police believe is "a gun similar to an AR 15."

Police are still trying to piece together the crime scene with witness testimony and are urging anyone with details to contact them. A motive for the shooting remains unclear and detailed descriptions of the vehicles involved were scarce, with police only saying that both cars appeared to be four-door sedans and that the victims' car was silver.

"As crazy as things are right now in our society, was this a road rage incident and these guys just happened to have narcotics in the car? Was it an accident that occurred and one driver got mad?" Dobbins said. "Or it could be a narcotics drug case. We just don't know."

Police closed Interstate 10 east at the site of the shooting, causing traffic to back up for hours as authorities investigated.