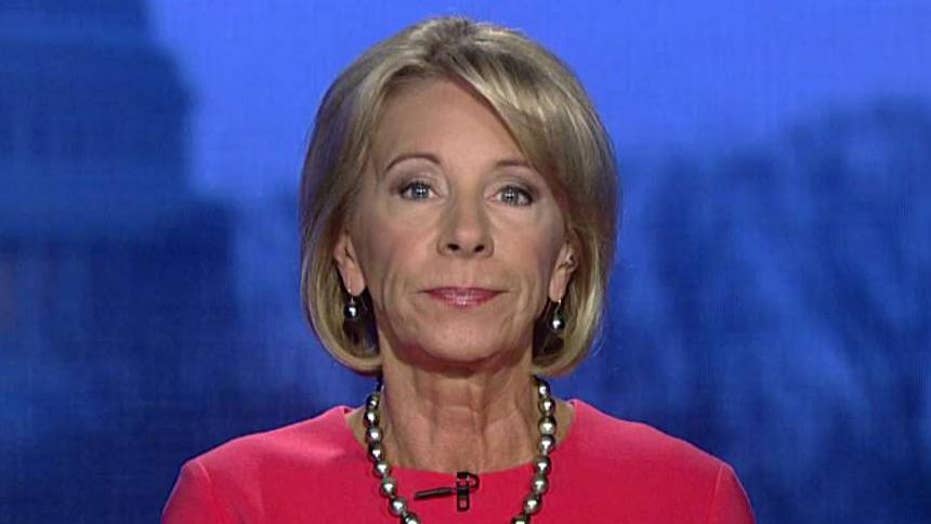 Secretary of Education DeVos to chair a commission on school safety.

President Trump's education secretary said Friday that she has "no intention" of taking action regarding any possible use of federal funds to arm teachers.

"Congress did not authorize me or the Department to make those decisions" about arming teachers or training them on the use of firearms, Betsy DeVos said.

"I will not take any action that would expand or restrict the responsibilities and flexibilities granted to state and local education agencies by Congress," DeVos wrote in a letter to U.S. Rep. Bobby Scott of Virginia, the top Democrat on the House committee overseeing education.

DeVos' comments came after a top official in her department, when asked about arming teachers, said states and local jurisdictions always "had the flexibility" to decide how to use federal education funds.

Frank Brogan, assistant secretary of elementary and secondary education, said arming educators "is a good example of a profoundly personal decision on the part of a school or a school district or even a state."

Democrats and education groups have argued, however, that the funds are intended for academics, not guns, adding that arming teachers is dangerous and could make schools feel like prisons.

It would be up to Congress, not the U.S. Department of Education, to place any restrictions or barriers to use those funds for purposes not currently in the law, a department spokeswoman said.

The debate arose earlier this month after a small rural school district in Oklahoma and the state of Texas asked the department to clarify what the funds can be used for.

"The position is: You have the language ... the language was written specifically to and always interpreted to mean 'This is your money,'" Brogan said.

Democratic lawmakers and teachers blasted the idea, accusing the Trump administration of acting in the interests of the National Rifle Association, and several Congress members called for legislation that would prohibit the use of those funds for guns.

Debate over whether teachers should be allowed to carry weapons intensified after President Trump voiced support for the idea following a massacre at a high school in Parkland, Fla., on Feb. 14 that left 17 people dead.

In the months since the shootings, DeVos has headed a panel on school safety that is supposed to issue a list of recommendations later this year, Politico reported.