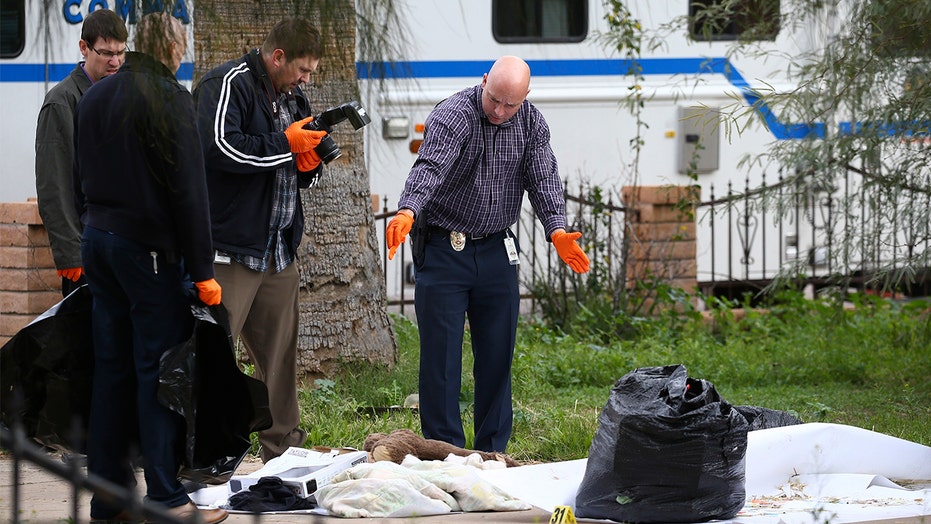 An Arizona couple was arrested Wednesday and are facing several charges, including concealing human body parts and child abuse after firefighters responded to a fire at their home and discovered skeletal remains in the attic.

Just hours earlier, social workers from the Arizona Department of Child Safety removed two children -- ages 9 and 4 -- from the house.

ARIZONA WOMAN CHARGED WITH MURDER IN DISTURBING KILLINGS OF 3 CHILDREN

Their removal occurred one week after officers from the Phoenix Police Department got a call from an 11-year-old girl who said she was home alone. The girl was removed from the house by social workers from the Arizona Department of Child Safety who suspected child abuse, police said.

Phoenix Police Department investigators examine evidence at a home where skeletal remains were found Wednesday, Jan. 29, 2020, in Phoenix. The remains have been found at a house where authorities previously removed at least one child as part of a child abuse investigation in which both parents of that child were in custody, police said Wednesday. (AP Photo/Ross D. Franklin)

On Wednesday, at around 2:07 p.m., firefighters descended on the house again after they were called about an ensuing blaze.

The children's father, Rafael Loera, attempted to stop authorities from coming in the house by telling them the flames were isolated to the fireplace, but the firefighters entered anyways, Phoenix fire Capt. Rob McDade told NBC News.

McDade added that if they had arrived at the scene five minutes later, the entire house would have been engulfed in flames, resulting in irreparable damage.

After putting out the flames, a department arson dog sniffed gasoline on the walls and floor, leading firefighters to the attic where they uncovered the human skeletal remains, McDade said.

This undated booking photos provided by the Maricopa County Sheriff's Office shows 50-year-old Maribel Loera and her husband 56-year-old Rafael Loera. They are accused of intentionally setting their west Phoenix home ablaze after their children were taken by the state, leading firefighters to find unidentified skeletal remains. They have been booked on suspicion of arson, child abuse and concealment of a dead body. Authorities haven't determined whether the remains belong to a child or adult. (Maricopa County Sheriff's Office via AP)

It is unclear how many children lived at the house.