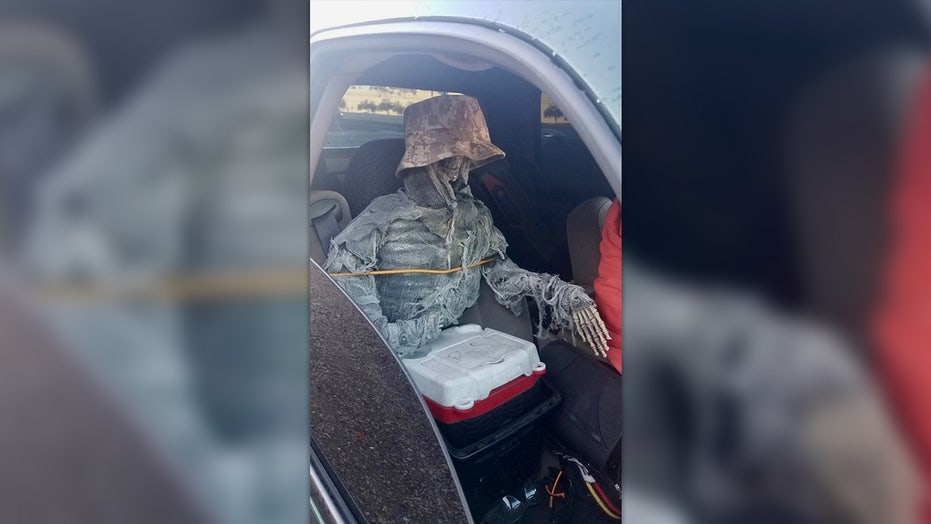 Arizona state troopers patrolling a highway HOV lane weren’t fooled when they came across a vehicle occupied by a driver and a partially-clothed skeleton.

The 62-year-old driver was pulled over Thursday on State Route 101 in Phoenix and issued a $400 ticket for illegal use of an HOV lane to bypass traffic.

“The motor unit that pulled up next to the vehicle looked inside the vehicle and at that point pretty much realized that the passenger in the front row was actually a skeleton,” Trooper Martin Sotelo told Fox 10 Phoenix.

Arizona troopers ticketed a man in the HOV lane with a skeleton as his passenger. (Arizona Department of Public Safety)

The fake skeleton had on a camo hat and was sitting upright in the passenger seat, held in place by rope.

Troopers snapped a photo of "Skeletor" and posted it on Twitter.

“Think you can use the HOV lane with Skeletor riding shotgun? You’re dead wrong!” the tongue-in-cheek tweet read.

"Just know that if you're caught, you will be cited," Sotelo said. "Points are going to be added to your license. It's just not worth it."

Arizona troopers cite about 7,000 HOV lane violators every year. Last April, a man was pulled over after driving in the HOV lane with a mannequin wearing a sweatshirt, baseball cap and sunglasses.