Are you better off today than a year ago? Most Americans say no

'We're marching in place': US has not made much progress over the last year, Americans say

WASHINGTON, D.C. – Rising inflation, economic instability and persistent political divisions show that the U.S. has not progressed much over the last year, Americans told Fox News.

"Purely from the United States' standpoint, I don't see a whole lot of difference from last year to this year," one man, Steve, said.

One woman, Tamara, said: "I'm sorry, is that a rhetorical question? American progress?"

Another woman, Laura, told Fox News she thinks the U.S. is in about the same spot as last year. 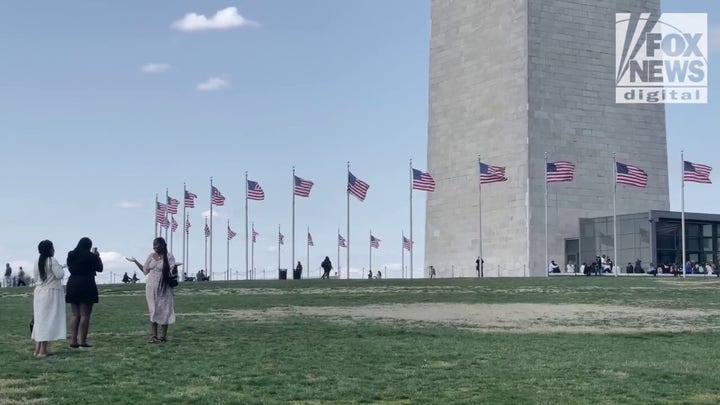 "Progress like in the forward direction? I don't think I've seen it," Alan, a Navy veteran from South Carolina, told Fox News. "The cost of living has gone sky-high."

People line up to get lunch from food trucks in Washington, D.C.

"First home buyers can't afford houses. Interest rates are going up now because of inflation," he continued. "To me, that doesn't mean that there's forward progress going on."

A Maryland man named Njama told Fox News: "As far as progress, I think we've made some in terms of COVID-19 and how far we think we have come, but we still have a long way to go."

Another man, Kent, said: "Economically there hasn't been much progress simply because of inflation."

"It's been tough on everybody," he continued.

Tom told Fox News: "A lot of Americans it feels like they're continually insecure. They're not able to get ahead."

A woman named Pearl told Fox News she believes that the U.S. is in a better spot than a year ago. She added that politicians are doing the best they can.

"Currently, the leadership we have is not leading well," a Texan named Andy said. "I don't think we're making good leadership decisions to help us advance and correct the problems that we have."

But divisiveness is persisting throughout the country, Steve told Fox News.

"What I would prefer to see is a little more unification and compromise," he said.

Kent told Fox News: "Hopefully, our congressional leaders can get together and start solving some problems."

"Sit down with people of opposing views and see where we can meet in the middle, because right now we just don't have enough lawmakers willing to just talk with each other as opposed to at each other," Njama said.