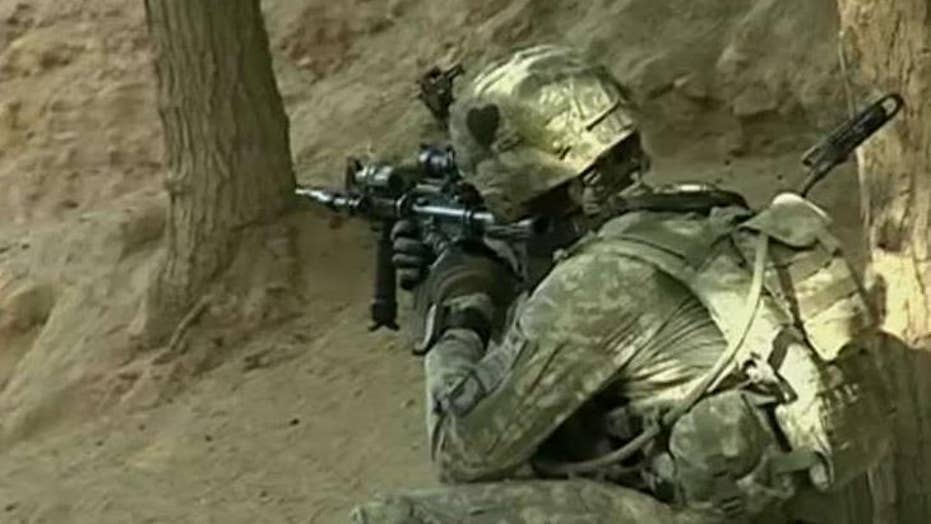 Afghanistan veterans Sen. Tom Cotton and Jason Church, a retired Army captain who lost his legs in an explosion, react on 'The Story.'

An American service member was killed in action Monday in Afghanistan, the U.S. military said, while the Taliban have since claimed responsibility for the deadly attack amid resumed peace talks.

The U.S. Forces-Afghanistan statement did not identify the soldier or say where in the country the member was killed. It said that in accordance with U.S. Department of Defense policy, the name of the service member killed in action was being withheld for 24 hours, until the notification of the family is completed.

BLACKBURN ON 'AFGHANISTAN PAPERS' FALLOUT: IT'S TIME TO INVESTIGATE

Following the U.S. military statement, Taliban spokesman Zabihullah Mujahid tweeted that the U.S. soldier was killed in the Chardara district in northern Kunduz province where U.S. and Afghan forces were carrying out a joint raid, The Associated Press reported. Mujahid said the insurgents had planted a roadside bomb that killed the service member.

Monday’s death brings the number of U.S. deaths in Afghanistan this year to 20. There have also been three non-combat deaths this year. More than 2,400 Americans have died in the nearly 18-year war.

Last month, two U.S. service members were killed in Afghanistan when their helicopter crashed in eastern Logar province. The Taliban claimed responsibility for that crash, saying they had downed the helicopter, causing many fatalities. The U.S. military dismissed the Taliban claim as false.

Meanwhile, peace talks between the U.S. and Taliban were reopened earlier this month with the initial focus of getting the insurgents to promise to reduce violence, with a permanent cease-fire being the eventual goal.