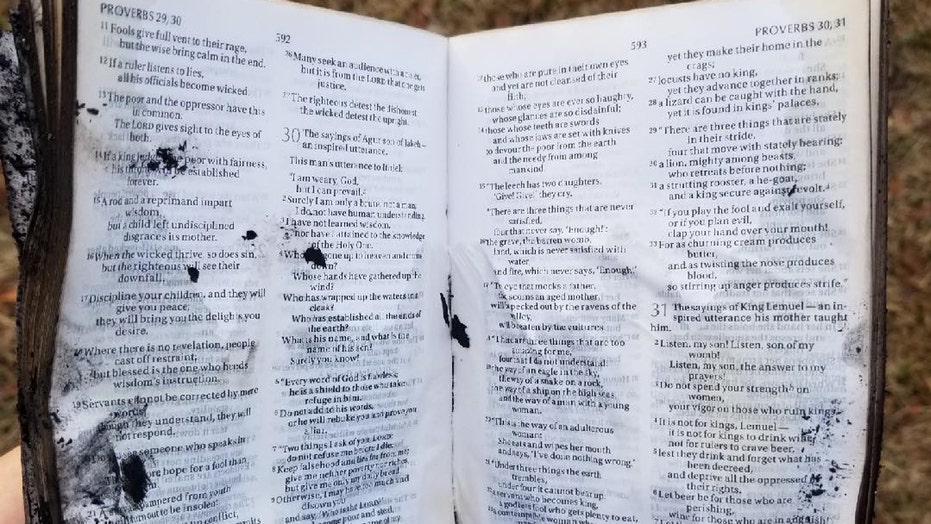 An Alabama family's house burned to the ground the day after Christmas, but they are grateful for life and faith after a few items managed to survive -- including the family's Bible.

Ashlee Pham, 23, from Steele, told Fox News her mom and 13-year-old brother were cleaning their bedrooms when they heard a strange knock on the door. When he saw part of the ceiling fall engulfed in high flames, he yelled for his mom and they managed to get out with their cat and piglet.

ALABAMA GRANDMOTHER GETS NEW HOME AFTER HERS WAS DESTROYED BY TORNADO

"If they would have not got out when they did, they could have been trapped," Pham said. "Some say that knock on the door was an angel watching over them or God. God was definitely with them when it happened."

Ashlee Pham said her family's Bible was opened to a comforting verse after their house burned down the day after Christmas. (Ashlee Pham)

Pham said her mom, Sherri Rosas, witnessed an answer to prayer when they found their grandfather's Bible and his ashes, along with their car keys.

She found the Bible opened to a verse in Proverbs that meant a lot to her.

No one was injured in the fire that burnt down a home in Steele, Alabama the day after Christmas. (Ashlee Pham)

A GoFundMe page titled, "Help get get a new home," [sic] set up by Ashlee Pham was started last week to help raise money for a new place to live with a goal of $5,000.

Firefighters told them the fire was started by a faulty wire in the attic, WBMA reported.