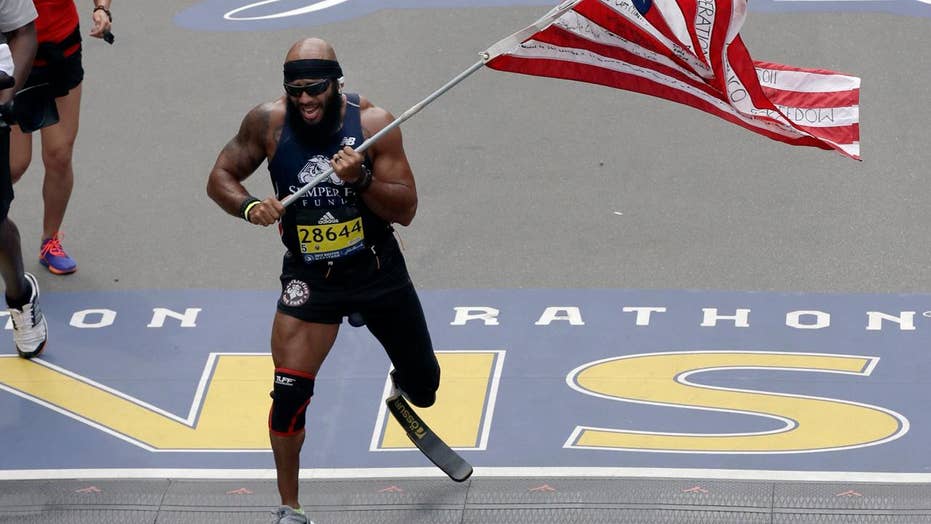 Two separate runners, who both lost a leg in Afghanistan, competed in and finished the 121st Boston Marathon

Adidas came under fire Tuesday for sending a seemingly insensitive email that praised its customers for "surviving" this year's Boston Marathon.

"Congrats, you survived the Boston Marathon!" the subject line of the email read.

The sports apparel company sent the congratulatory email to its subscribers along with a promotion about its Boston Marathon-branded running gear.

Customers, however, immediately criticized the company for using the word "survived" in the headline, linking it to the 2013 Boston Marathon bombing that killed three people and injured more than 260 others.

"Hey @adidas, not the best choice of words for subjects for email blasts to your members, you think? #BostonMarathon #BostonStrong #changeit," one Twitter user wrote.

Dear @adidas, I love you, but you need to talk to whoever is doing your email marketing... #BostonMarathon #toosoon @adidasrunning pic.twitter.com/Ow64UqMj9o

.@adidas I want to know who at your company thought this was a smart #EmailMarketing campaign. pic.twitter.com/gdYVYketyz

"@adidasrunning I know this has good intentions but could really be taken the wrong way.@adidasoriginals @adidas" another person wrote.

In a statement Tuesday afternoon, the company apologized for its choice of words.

Hey @adidas, not the best choice of words for subjects for email blasts to your members, you think? #BostonMarathon #BostonStrong #changeit pic.twitter.com/ucRLiYy3pR

@adidas poorly worded. Seriously reconsider whoever wrote this email for you guys pic.twitter.com/Xe683w3sRu

"We are incredibly sorry," the statement said. "Clearly, there was no thought given to the insensitive email subject line we sent Tuesday. We deeply apologize for our mistake."