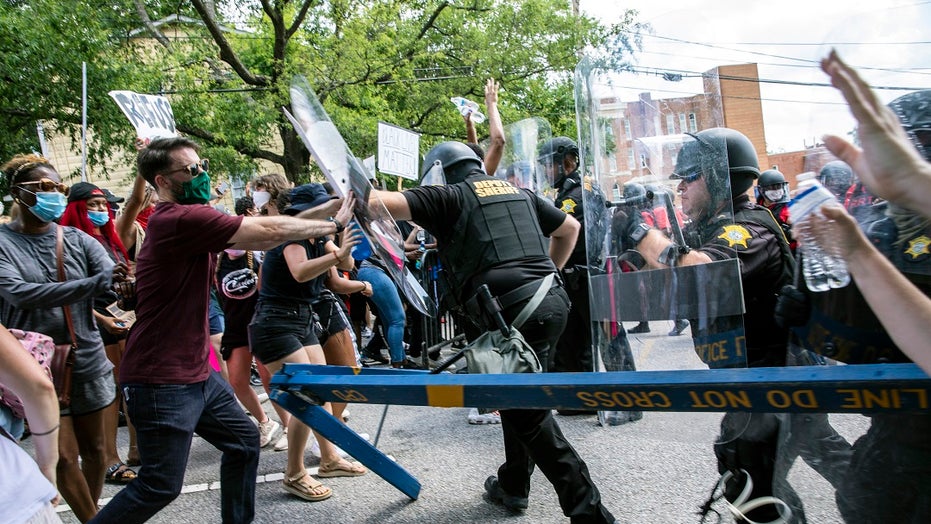 A protest organizer in South Carolina said he will postpone future demonstrations after at least 13 people who took part in recent rallies tested positive for the coronavirus.

With cases climbing in the U.S. following the states' reversals of shutdown policies, an increase in testing, as well as protests across the country -- Lawrence Dishawn Nathaniel urged those who attended previous rallies to get tested.

Protesters and police clash in Columbia, S.C., on Sunday. People protested against police brutality sparked by the death of George Floyd at the hands of police in Minneapolis on May 25. (Jason Lee/The Sun News via AP)

Nathaniel has helped lead protests across the state over the past month through an initiative called I Can't Breathe SC, following the death of George Floyd in police custody. He also founded a nonprofit community organization, People Demand Action.

He said those infected attended protests from May 30 to June 17 in Columbia, Charleston, and Greenville. Four organizers, three photographers, and six protesters tested positive.

Nathaniel said they will conduct advocacy efforts online and virtual. He asked community leaders to do the same.

Experts have debated whether protests can add to the spread of the virus, with a study published in the National Bureau of Economic Research finding they had little effect on the recent spike in cases -- even though many were seen gathering in close proximity, with some yelling and shouting. The study did add that it was possible the protests caused an increase in the spread of COVID-19 among those who attended.

Dr. Anthony Fauci, the nation's top disease expert, said protests and reopening the economy too soon could be the perfect recipe for a surge in cases.

Vice President Mike Pence said Monday that younger people, seen as the majority of those who attended recent protests across the country are increasingly testing positive for COVID-19. The virus also impacts the African American community at a disproportionate rate.

"We are seeing more people test positive under the age of 35, particularly in our discussions with the leadership in Florida and in Texas," Pence said on a conference call with state governors Monday, which ABC News reported.

The younger population has the potential to spread the virus to the elderly or those with preexisting conditions, seen as those more vulnerable to the virus, according to the Centers for Disease Control and Prevention.

“The recent growth appears to be primarily due to increased cases in younger age groups, especially those aged 21-40,” said experts at the University of Texas Southwestern Medical Center, in an analysis released Monday, according to The Washington Post. “In June, 50 percent of hospitalized COVID-19 patients and 30 percent of ICU patients have been under 50 years old.”

The Department of Health and Environmental Control in South Carolina has reported record increases in daily cases within the past week.

The state has seen more than 25,666 confirmed coronavirus cases and at least 659 deaths from the virus as of early Tuesday, according to data from Johns Hopkins University.