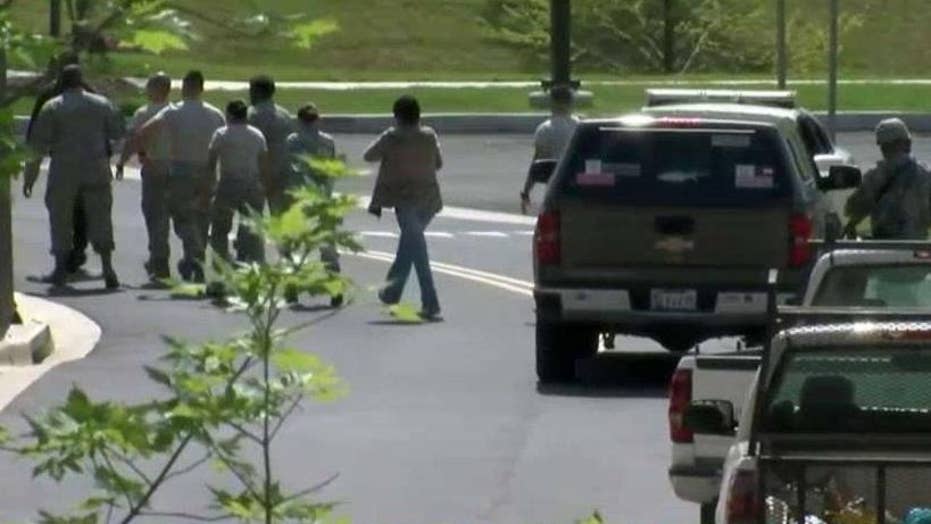 All-clear at Joint Base Andrews after active shooter reports

Base was on lockdown amid investigation into 'real world threat'

Officials at Joint Base Andrews outside Washigton, D.C. lifted a lockdown Thursday after determining that a report of an active shooter on the base was untrue.

The confusion was heightened by a planned active shooter drill that had not yet begun and was planned for later in the morning. Someone through a window inside a Malcolm Grow Medical Facility building spotted two individuals – whom the base identified as security personnel – with long guns inspecting the area, a law enforcement source told Fox News.

The individual inside the medical building called 911 unaware they were security, the source said. Given the call, first responders had to treat the situation as a real response. The drill had been planned to take place on the opposite side of the base.

Officials said in a Facebook post Thursday that there was no shooter and no threat to the base or workers there.

"Joint Base Andrews was scheduled to conduct a no-notice active shooter exercise in the late morning on the opposite side of the base," JBA wrote. "However, reports of a real-world active shooter situation at the medical facility were miscommunicated before the exercise was able to begin. There was a misidentification of the security forces emergency services team who were conducting a routine inspection of the medical facility, which caused the distress call to the base defense operations center."

JBA is located in Prince George's County, Maryland. The base is located about 15 miles from the White House and is where Air Force One is parked.

"Fortunately, this was not a life-threatening situation," Col. Brad Hoagland said in the base statement. "We take all threats seriously and reacted to ensure the security of those on the base."