BIG PINE KEY, Fla. – As the Carolinas brace for a monstrous Category 4 hurricane marching their way, many still remember the last powerful storm to hit the U.S. mainland one year ago today.

On Sept. 10 of last year, Hurricane Irma blew into the Lower Florida Keys, before making a second landfall on Marco Island as the storm headed toward Tampa. Many in the Keys continue to struggle.

Breaking into tears, he said it’s been a very tough year. He remains emotional.

“Yeah,” he said, as he wiped tears from his eyes. "But it worked out, we’re happy, we’re healthy.”

He lost months of charter boat business on his vessel, the Yabba Dabba Do, and said today he’s still only 80 percent back to normal.

“There are a number of captains who threw in the towel. They sold their boats or just moved onto private jobs elsewhere," he said. "Oh, god.”

The last time Fox New met Clay Crocket was as he walked into his house and events catering business to see, for the first time, what was left.

"As you remember last time, we couldn’t even walk in this stuff,” he said. He estimates Irma cost him a few hundred thousand dollars, including orders for his Florida Keys Hot Sauces that he couldn’t fill.

And he still has a hole in his roof. 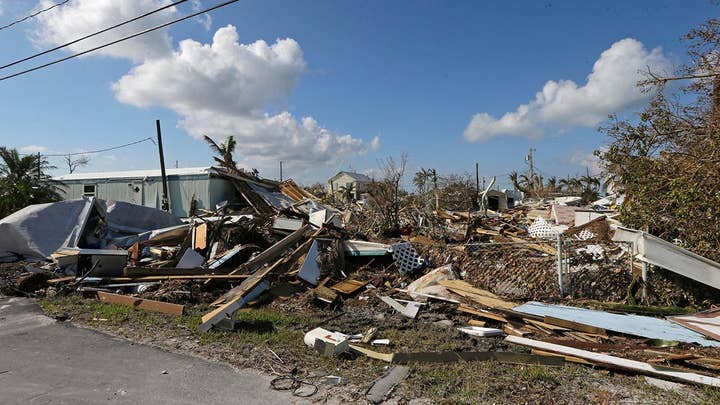 "I’d rather just try to move forward,” Crocket said. "The last year been a very tough year. Gotta move forward, I don’t want to stare at it too hard in the face because the future is what I have to look for.”  Much of the challenge for the tourist-dependent Keys economy was the thousands of hotel rooms lost.  No rooms, no tourists, no business and no money to make.

Just last week, the iconic Hawk’s Cay Resort finally reopened, with its 450 rooms. Most hotels expect to be fully rebuilt and reopened by the end of the year.

Hurricane Irma destroyed 25 percent of the homes in the Keys, including 3,000 trailers. Finding new, affordable housing continues to be a major challenge. The St. Columba Episcopal Church in Marathon is helping. It just purchased an old apartment building to rehabilitate to provide small apartments for the working class.

And the Florida Keys Land Trust is building 750-square-foot cottages on hard hit Big Pine Key. They’re elevated 12 feet off the ground. The first four cottages are now coming online. The list to move into one is long.

Many Irma victims gave up and left the Keys, moving north to rebuild their lives. Many lost everything.  But for those that have chosen to stay, despite the annual hurricane threat, their resiliency survived.

“You may not notice the improvements, but Islamorada looks great,” said Leopold.  "They really put the whole town back together."

Fox News producer Ivonne Amor contributed to this report. She can be reached at @ivonneamor1 .