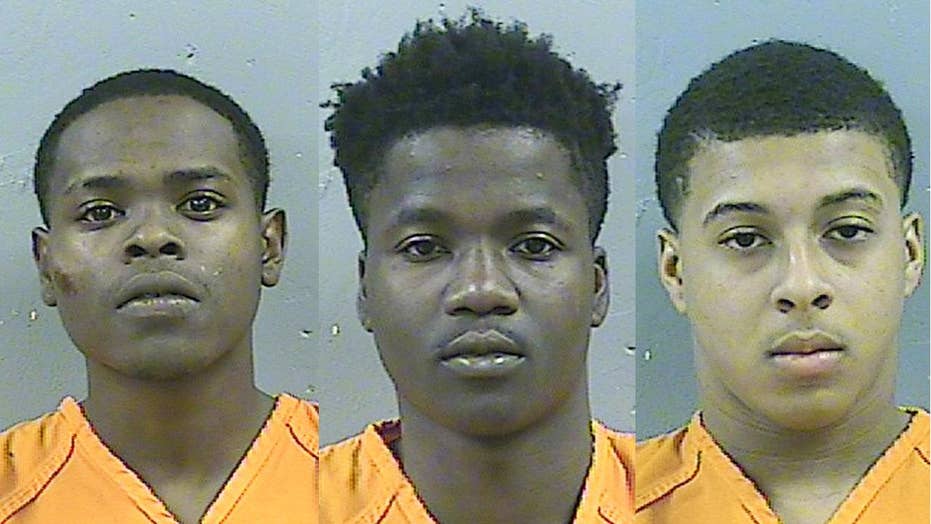 Three young Mississippi men on Thursday were arrested hours after a 6-year-old boy was found shot dead in his mother's stolen car and the suspects will be charged with capital murder, authorities said.

Madison County District Attorney Michael Guest announced at a news conference that authorities plan to charge Byron McBride, D'Allen Washington and Dwan Wakefield in the death of the child.

Authorities found Kingston Frazier shot at least once in the back seat of his mother's stolen car, which Jackson Police Cmdr. Tyree Jones said was abandoned in a muddy ditch about 15 miles north of the Kroger parking lot where he was taken.

“All they had to do is let this kid off on the side of the road, at a grocery store, at a church, anywhere else, but they chose to kill the kid,” a sheriff spokesman said, according to The New York Times.

Frazier had gone missing after 1 a.m. Thursday when a man was seen on video taking the car from the parking lot of a supermarket in Jackson, the state capital, according to authorities.

The mother, Ebony Archie, left the boy in the car, its engine running, while she went inside the supermarket early Thursday, sheriff's deputies have said.

The store's parking lot is patrolled by sheriff's deputies, including one in a golf cart. She reportedly collapsed after learning her child was killed. She was carried outside the district attorney’s office by a family member.

About nine hours after the boy was reported missing, a man reported the missing Toyota Camry was beside a dead-end road in the northern suburb of Gluckstadt.

Security video shows that after Archie left, another car drove up and a man got out and then drove off in the Camry.

"We've been looking for him for nine hours in every neighborhood in Jackson," said Deanna Moore, the boy's aunt. Addressing those who took the car, she added, "You could have just dropped him off."

"A 6-year-old is gone," said Kingston's cousin, Kolby Irby. "His mother has to deal with this. That's her baby."

The three suspects were arrested within hours of the child's body being found, authorities said, adding video and a witness helped identify them.

Authorities said Washington and Wakefield are both 17. McBride's age was not immediately released.

In Mississippi, 17-year-olds accused of capital murder are tried as adults. The capital murder charge means prosecutors could seek the death penalty if the three are convicted, Guest said.

The district attorney also said it was possible the charges might change, adding the three are expected to make initial court appearances on Monday.

One lawyer said he is not yet officially representing one of them and declined requests for comment. Guest said the other two do not yet have lawyers.

Authorities did not answer questions at the news conference with reporters, and it's unclear what role each of the three suspects is alleged to have played.

Wakefield was a quarterback last year at a high school in Madison County, north of Jackson, county Superintendent Ronnie McGehee told The Clarion-Ledger. McGehee also said Wakefield had been dismissed from the team but didn't elaborate.

The child's body was taken for an autopsy at the state crime lab and the car was towed away by police as they continue to investigate.