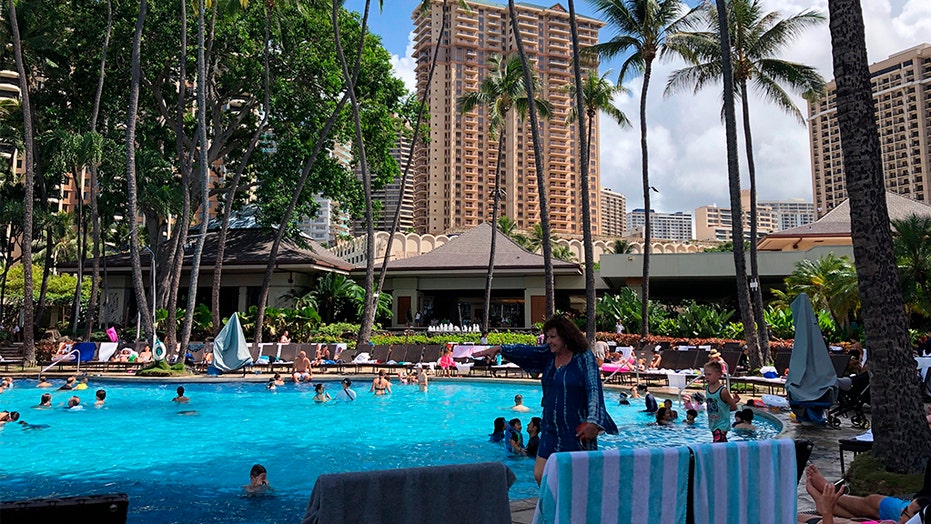 Authorities in Hawaii are investigating fires that they believe were intentionally set at three high-rise resort hotels near Waikiki Beach over the past four days, officials said Wednesday.

No one was injured in the fires, but two of the hotels were partially evacuated. Firefighters have referred the cases to the police to investigate. Honolulu police said they are looking for a person of interest who was "seen on surveillance video at the scene of three Arson cases."

Honolulu police said they are looking for a person of interest that was "seen on surveillance video at the scene of three Arson cases."  (Honolulu Police Department)

Honolulu Fire Department Capt. Scot Seguirant told reporters that all three fires started at night in a hallway on a floor with guest rooms.

The first fire caused $4,000 in damage Sunday at the Alohilani Resort Waikiki Beach and was reportedly extinguished quickly. Police said that around 10:05 p.m. Sunday hotel security responded to fire alarms on separate floors of the hotel.

The interior of the Alohilani Resort is shown in Honolulu on Wednesday, Aug. 7, 2019. Hawaii authorities are investigating three fires that were intentionally set in three different high-rise resort hotels near Waikiki Beach over the past few days.  (Associated Press)

Marc and Mariam Walkowski of Grand Rapids, Mich., who were staying at the nearby Courtyard by Marriott, told The Associated Press that “It appeared that they evacuated nearly everybody” from the resort.

People were taking photos and video and were calm, Marc Walkowski said.

"There's a lot of hotels in this area so I'm not concerned that ours would be a target, but you never know," he said. "We weren't aware that it was arson, we assumed it was an accident."

The exterior of the Alohilani Resort is shown in Honolulu on Wednesday, Aug. 7, 2019.  (AP Photo/Caleb Jones)

The second fire was reported near a storage room on the 14th floor of the 25-story Waikiki Beachcomber by Outrigger in Honolulu on Monday around 7:45 p.m. and caused $1.8 million in damage.

The fire forced an evacuation of the building, the Honolulu Star-Advertiser reported. Fire officials told the paper that a fire alarm and sprinkler system were activated, which alerted occupants and kept the fire from spreading.

Police said “an unknown suspect used an accelerant to ignite a fire causing property damages.” Honolulu police added that while hotel guests were evacuated from the hotel, two rooms had been burglarized.

A man was caught on surveillance video carrying at least two backpacks “that appear similar to the ones taken in the burglary,” police said.

The third fire broke out Tuesday around 8:40 p.m. on the 28th floor of the 38-story Hilton Hawaiian Village Grand Waikikian Tower and hotel security extinguished the flames with a fire extinguisher. Police said the fire caused $10,000 in damage.

The Grand Waikikian at Hilton Hawaiian Village, one of three hotels officials said was intentionally set on fire, is shown in Honolulu on Wednesday, Aug. 7, 2019.  (Associated Press)

The fire activated a fire alarm system and hotel security evacuated occupants on that floor, according to the Star-Advertiser.

Matt Kim of San Francisco, who is visiting the islands with his family, said he saw the road to the Grand Waikikian was closed Tuesday but had no idea there had been a case of suspected arson.

"That's pretty scary, especially security-wise," said Kim, who is staying at the sprawling Hilton complex in Waikiki. He added he would like to see more foot patrols around the area but doesn't plan to change hotels unless officials recommend he do so.