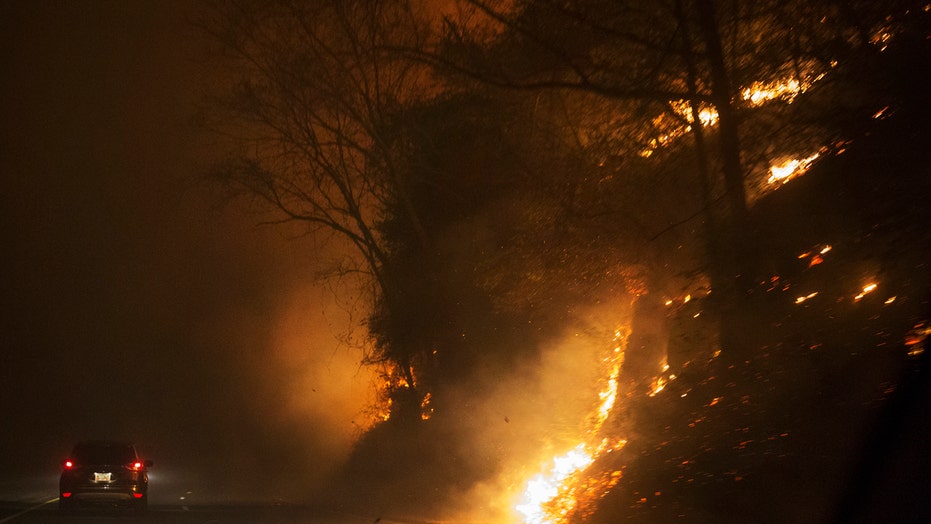 Authorities in Tennesssee announced Tuesday that three people died in the massive fire that continues to bear down on the Great Smoky Mountain region of Tennessee.

Emergency officials said that 14,000 people were evacuated from Gatlinburg alone and at least 250 buildings have been damaged or destroyed. There were no details on the fatalities.

The Tennessee Emergency Management Agency said in a news release that at least 10 of the homes that were impacted were in Gatlinburg, including a 16-story hotel and an apartment complex. According to Fox 17 Nashville, 30 structures have been burned in Gatlinburg.

Linda Monholland, who was working at Park View Inn in Gatlinburg, said it was about 9 p.m. Monday when she left her workplace with about five other people. Surrounded by flames the whole way, they walked for about 20 minutes to a trolley to evacuate.

"There was fire everywhere. It was like we were in hell. Hell opened up," said Monholland, who was staying Tuesday at Rocky Top Sports World, an 80-acre sports facility that has been turned into a shelter. "Walking through hell, that's what it was. I can't believe it. I never want to see something like that again in my life, ever."

Although some relief arrived in the form of calming winds and rain, forecasters warned that the drought which has plagued several Southern states was likely to continue. Rainfall amounts have been 10 to 15 inches below normal during the past three months in many parts of the South.

Authorities issued a Level 3 state of emergency and ordered the evacuations of Gatlinburg, Mynatt Park, Park Vista, Ski Mounty and Pigeon Forge on Monday. The National Guard was being deployed to help with evacuations.

Officials with Dollywood, the amusement park named after country music icon Dolly Parton, said the theme park wasn't damaged, but more than a dozen cabins operated by the park had been.

Dollywood suspended park operations at least through Wednesday. Its DreamMore resort will be open on a limited basis as a shelter and for registered guests.

Great Smoky Mountains National Park Superintendent Cassius Cash said authorities had rescued 29 hikers in Sevier County from the raging fire. Cash added that there weren’t any major injuries or deaths as of early Tuesday. One person was reported suffering from a burn injury.

Officials at Great Smoky Mountains National Park have closed all facilities in the park due to extensive fire activities and downed trees.

Cash added that the wildfires were “unprecedented.”

The Red Cross is accepting donations for those impacted by the fire. You can donate by clicking here or by texting "REDCROSS" to 90999.