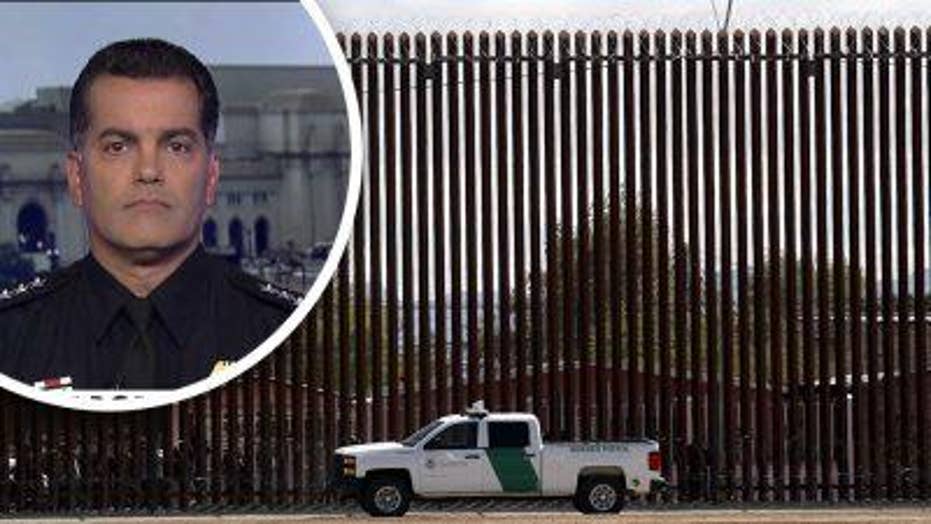 Three people were arrested Wednesday for their alleged role in a human trafficking scheme that involved a 9-year-old Mexican boy being delivered to his family in Texas for $2,500, the U.S. District Attorney’s Office said.

Elida Kassandra Moreno, a 26-year-old American citizen who lives in Mexico, is accused of bringing an illegal immigrant into the U.S. for profit and making a false statement to a federal agent. A conviction on those charges could bring a penalty of 15 years behind bars.

Pedestrians wait to enter Brownsville, Texas, at a legal port of entry in Matamoros, Mexico, on Thursday. (AP)

Moreno was arrested in Batesville, Texas, early Wednesday during a routine traffic stop, Zavala County Sheriff’s deputies said. The deputies had been acting on law enforcement information they received, according to the U.S. District Attorney’s Office.

While in the custody of the Homeland Security Investigations’ (HSI) office in Eagle Pass – that's less than a mile from the Mexican border – Moreno allegedly told investigators that a neighbor’s friend in Piedras Negras, Mexico, had approached her about taking a 9-year-old boy to his family in San Antonio.

Moreno allegedly told investigators that she transported the boy to Eagle Pass, where they rented a motel room before taking a shuttle to San Antonio the next day. She allegedly used her son’s birth certificate to elude authorities, the U.S. District Attorney’s Office said.

Nery Uriostegui Dominguez has been charged with conspiracy to transport an illegal immigrant. (Bexar County Jail)

At the request of her friend’s neighbor, Moreno said she met Nery Uriostegui Dominguez, a 26-year-old Mexican resident, in San Antonio with the intention of handing off the boy in exchange for $2,500, the U.S. District Attorney’s Office said. Her friend's neighbor then apparently rescinded the request, and a struggle ensued between Moreno and Uriostegui. San Antonio police reportedly arrived on the scene and arrested Uriostegui.

SALVADORAN MAN DIES IN US CUSTOMS AND BORDER PROTECTION CUSTODY

Moreno allegedly told investigators that her friend’s neighbor said to meet her 65-year-old father, Victor Manuel Monsivais, at a truck stop and deliver the boy.

Authorities tracked down Monsivais in San Antonio, arrested him, and took custody of the child, the District Attorney’s Office said. It was unclear whether the boy remained in U.S. custody or was deported.

Moreno, Monsivais and Uriostegui have all been charged with conspiracy to transport an illegal immigrant. If convicted, the defendants will face up to 10 years in federal prison and a maximum $250,000 fine.