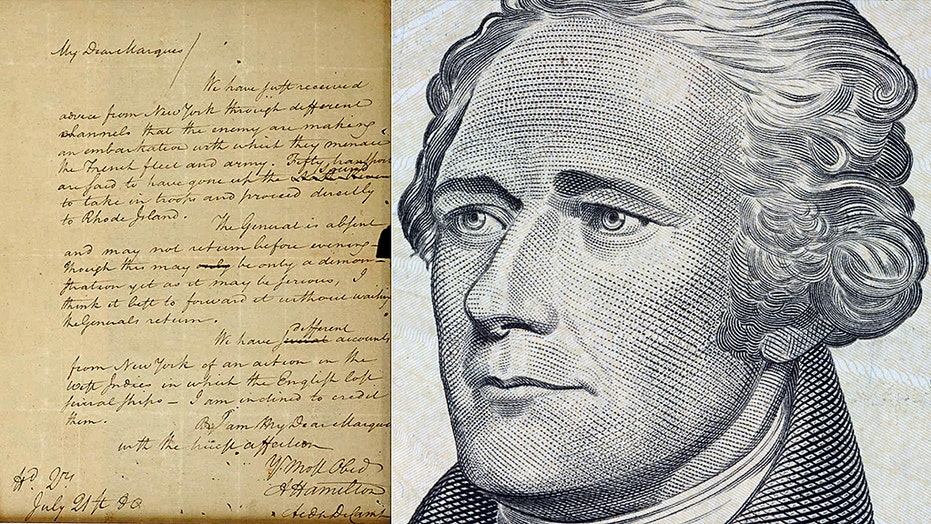 A 1780 Alexander Hamilton letter stolen more than 74 years ago in Boston has resurfaced in Virginia.

The letter was addressed to Marquis de Lafayette in Rhode Island and warned of a British plan to attack Newport.

“We have just received advice from New York through different channels that the enemy are making an embarkation with which they menace the French fleet and army,” Hamilton wrote. “Fifty transports are said to have gone up the Sound to take in troops and proceed directly to Rhode Island.

The attack was called off when the French hurried to fortify defenses, The Associated Press reported.

The image on left shows a 1780 letter from Alexander Hamilton to the Marquis de Lafayette, that was stolen from the Massachusetts Archives decades ago. (U.S. Attorney's Office via AP)

Boston U.S. Attorney Andrew Leilling on Wednesday went to court to demand the return of the letter to the Massachusetts Archives, from which it went missing.

“The theft, which also involved original papers of George Washington, Benjamin Franklin, Paul Revere and Benedict Arnold, among others, was not discovered for several years,” Lilling’s forfeiture action says.

A Massachusetts Archives employee stole the documents between 1937 and 1945 and sold them to dealers in rare documents and books.

That person was arrested in 1950 on a larceny charge.

Lawyers for Leilling believe the letter wound up in the hands of a collector who purchased it from a dealer in Syracuse, N.Y., in the 1940s.

When that collector died,his collection was divided among his children.

Before putting the letter up for sale, an auction house researcher went on Founders.com to verify the document’s authenticity and learned that it was missing from the Massachusetts Archives, Boston.com reported Saturday.

The auction house then contacted the FBI.