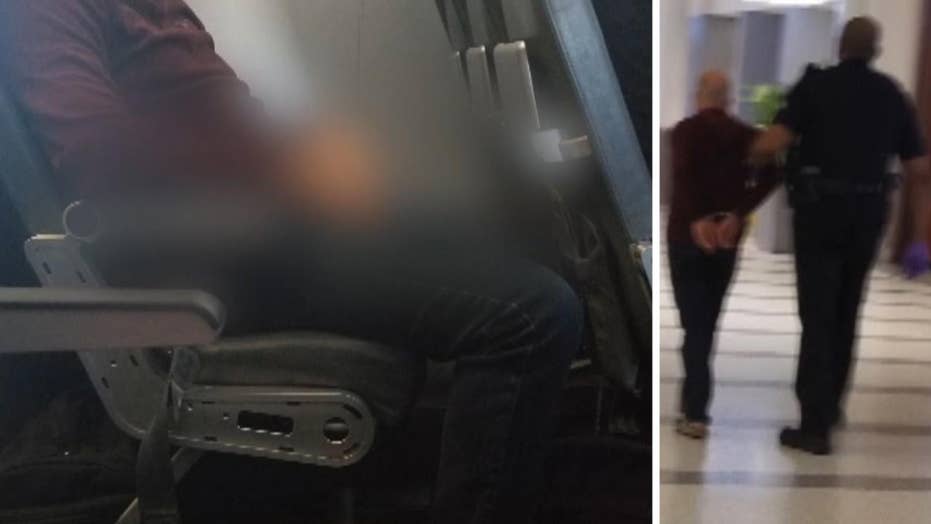 Disorderly Frontier passenger pees on seat in front of him

The skies were a lot less friendly in 2018, with a number of weird or violent altercations — including fist fights over flatulence and peeing on a fellow passenger’s seat — reported by almost every airline.

In a survey of airplane crew members, 67 percent of respondents said they have witnessed passengers behaving aggressively or violently toward each other, and 10 percent have experienced firsthand passenger-initiated violence.

Here are the strangest mile-high events that took place in 2018.

An Aeroflot passenger was caught on video in a heated argument with crew members that turned violent — purportedly over a missing cellphone, which, spoiler alert, turned out to be in his possession the entire time.

The man, who, according to the airline, had been drinking on the flight from Moscow to Tel Aviv, had to be restrained by another passenger when he got violent toward the attendant, shouting at him and attempting to punch him, Metro reported.

The fight reportedly broke out after the man thought he lost his phone and blamed the airline.

A Siberian Airlines passenger was arrested after allegedly punching and strangling men, women and children — and even sexually assaulting one female passenger — on a flight from St. Petersburg to Novosibirsk, Russia.

The unidentified man, 47, reportedly began his rampage by pacing through the aisle, spouting obscenities. At one point he called a baby a "little slut" and threatened to "break" a man's face. A flight attendant asked him to take a seat near the rear of the aircraft, but he ignored the request, according to a passenger quoted in The Sun.

Footage taken by one of the passengers shows a group of men appearing to beat the man into submission as passengers prepare to deplane.

After landing in Novosibirsk, authorities boarded the aircraft and placed the unruly passenger under arrest.

Talk about a scare in the air.

United Express passengers traveling from San Francisco to Boise, Idaho, were in for a fright on March 5, when a middle-aged female passenger flying first class had a bizarre outburst and tried to open the emergency exit door halfway through the trip while yelling "I am God," Idaho Statesmen reports.

An airline passenger was reportedly spotted allowing her toddler to use a portable potty in the aisle of the plane — and then becoming defiant when she was told to stop.

An Instagram account called PassengerShaming first shared a photo of the alleged incident: “Parent brings own potty seat on board, sets it in aisle midflight to have child use (in front of everyone)."

PassengerShaming’s post has since generated more than 9,000 likes and 1,500 comments, with critics calling the woman’s actions “vile” and suggesting she be banned from airline travel — or any public mode of transportation — for good.

An in-flight incident, which took place on Aug. 2, reportedly started after an intoxicated woman began giving lap dances to male passengers seated near the front of the aircraft, and flashing her breasts as well.

“We got on the plane and her friends were all seated at the back, and she was at the front amongst guys who were giving her more drink,” a passenger identified as Josh, who also filmed the altercation, told Unilad.

“She was up lap-dancing on them and she got her boobs out, and she was a mess the whole time. She was also doing cartwheels down the aisle of the plane while we were flying along,” he said.

After getting completely naked, the man dressed himself at the request of the airline crew. Later in the flight, he attacked crew members for trying to calm him down after he harassed a flight attendant. (Viral Press)

Shortly after takeoff, the 20-year-old university student, who was flying back home on the Malindo Air flight, began to exhibit disturbing behavior, New Strait Times reported.

At about 10,000 feet, the man took off all his clothes and started watching pornography on his laptop, according to the paper. Though the man put his clothes back on after he was asked, later in the flight he tried to hug two flight attendants before becoming aggressive and attacking another crew member.

With the help of other passengers, crew members were able to restrain the man for the rest of the flight by tying a piece of cloth around his hands, News.com.au reported.

A woman on a flight from Turfy to Russia was caught on video drying a pair of underwear with the overhead vent. (BTMG)

One woman was caught literally airing out her dirty laundry.

The woman was traveling with Ural Airlines from Antalya, Turkey, to Moscow, Russia, when she was recorded holding a pair of white cotton underwear over her head up to the air vent to dry them off.

A fellow passenger on the flight told The Sun that the woman didn’t seem even remotely embarrassed as she held the underwear to the vent for at least 20 minutes.

“Everybody was looking with interest and confusion, but everybody remained silent,” the passenger told the publication.

A Frontier Airlines passenger was led away from his arrival gate in handcuffs after passengers say he grabbed two women during a flight and then urinated on the seat directly in front of him.

The FBI later confirmed that the man, identified as 45-year-old Michael A. Haag, has since been charged with interfering with flight crew, as well as indecent exposure, Fox 31 Denver reported.

The ordeal began about two hours into Frontier Airlines Flight 864 from Denver to Charleston, S.C., per Fox 31 Denver. Haag had allegedly been drinking before witnesses say he first grabbed a woman seated next to him.

An American Airlines flight from Phoenix to Boston was diverted to Kansas City, Mo., Monday evening after a passenger allegedly refused to stop doing pull-ups using the plane’s overhead bins.

According to other passengers on Flight 2763, the unidentified man appeared to be intoxicated when he boarded the plane with a woman and two dogs. Soon after the man began bizarrely demonstrating his athleticism, which eventually led to him being removed from the plane during a 90-minute diversion into Kansas City.

A pilot made an emergency landing in February after a fight broke out over a passenger who allegedly refused to stop passing gas.

Two Dutchmen sitting next to the flatulent passenger reportedly asked the man to stop, but he refused and continued to break wind aboard the Transavia Airlines flight from Dubai to Amsterdam Schiphol.

The budget airline crew allegedly did not help the passengers after their complaints, Metro reports, leading to a fight between the men. Despite a warning from the pilot, the altercation continued and forced the airplane to be diverted to Vienna Airport, where it made an emergency landing.

Police boarded the plane once it landed and removed two women and two men that the pilot reported as “passengers on the rampage,” Metro reports.