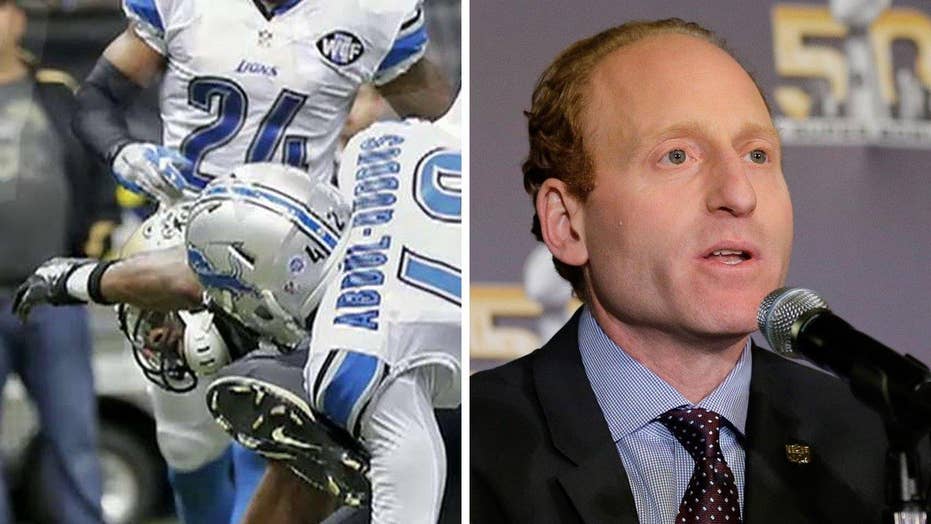 NFL admits link between football and the brain disorder CTE

The NFL continued to use league-backed reports downplaying the dangers of head injuries despite significant evidence of flawed data and faulty analysis, The New York Times reported Thursday.

The NFL on Thursday afternoon pushed back on The Times story, calling it "pages of innuendo and speculation."

"Today’s New York Times story on the National Football League is contradicted by clear facts that refute both the thesis of the story and each of its allegations," an NFL statement said.

The heart of The Times' story involved the large number of concussions not used in the NFL-backed research. When questioned about the unreported diagnoses, the NFL told The Times “the clubs were not required to submit their data and not every club did.”

For instance, the data shows no concussions from the Dallas Cowboys, including at least four suffered by Aikman. Cowboys owner Jerry Jones refused this month to link the playing of the sport to any long-term brain diseases, such as chronic traumatic encephalopathy.

“We don’t have that knowledge and background and scientifically, so there’s no way in the world to say you have a relationship relative to anything here,” Jones said at the NFL owners meetings in Florida, according to The Washington Post. “There’s no research. There’s no data.  .  .We don’t know or have any idea that there is a consequence as to any type of head injury in the future.”

Findings from the NFL’s research had been published in 13 peer-reviewed journals, which are thought to hold a high standard in medicine, and the NFL has referenced these studies as alleged evidence that brain injuries don’t pose long-term health consequences for its players.

But critics have met that assumption with a high degree of skepticism. Their criticism even prompted a feature film starring actor Will Smith, and many saw the movie as a scathing portrayal of the NFL’s disregard for the potentially life-threatening risks of repeated brain trauma.

Offensive vs. Defensive Concussions in the NFL Since 2012 | PointAfter

Numerous studies have linked repeated brain trauma in high-impact sports like football to various health effects, including the development of chronic traumatic encephalopathy (CTE), an increased risk of suicide, and prominent brain changes that may signal unknown harm.

In a move that seemed to signal a shift in the league’s views earlier in March, Jeff Miller, the NFL’s top medical and safety officer, told a congressional roundtable that there was a definite link between football and neurological diseases such as CTE. It was the first time a top league official linked the sport with brain disease.

“The answer to that question is certainly yes,” Miller said.

“The comments made by Jeff Miller yesterday accurately reflect the view of the NFL,” the league said in a statement.