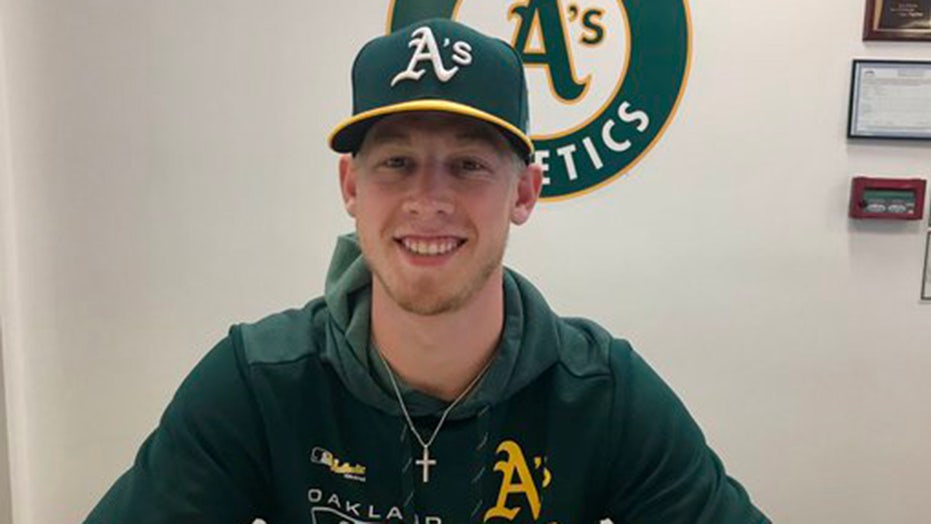 A baseball fan's life has changed forever after he threw an unbelievable pitch at a Major League Baseball game, shocking officials and viewers around the world.

The 96 mph pitch earned him a minor league contract, launching himself into a career of a lifetime.

"This story is not over. It is not the beginning. I am writing the next chapters and excited for this journey!"

Nathan Patterson went to a Colorado Rockies game with his brother Christian on July 15, when the two participated in a speed pitch challenge at Coors Field. The 23-year-old's pitch clocked in at 96 mph and luckily his brother got it on camera, the New York Post reported.

MLB SUSPENDS EIGHT AFTER WILD RED-PIRATES BRAWL, INCLUDING BOTH MANAGERS

The video went viral with more than 700,000 views — and it got the attention of the Oakland Athletics front office.

This week, Patterson linked a minor league deal with the A's.

"Words cannot describe this feeling and I cannot thank everyone enough who has been part of this journey so far!" Patterson captioned an Instagram photo. "This story is not over. It is not the beginning. I am writing the next chapters and excited for this journey! Time to focus even more, work even harder, and it all starts with your mindset. Go after your dreams and make them a reality!"

Patterson had been reportedly working toward a potential contract with the A's since February, but his astounding pitch at Coors Field concluded the agreement.